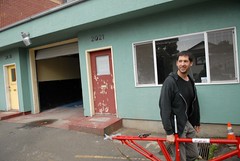 Joe Doebeles big idea is to help other Portlanders with theirs.

The 44-year-old Doebele, who grew up in Chicago and moved to Portland in 2000, has rented a building near the corner of SE 20th and Belmont and is setting up Portlands first-ever bicycle industry incubator Stumpworks.

As he led me around the building, Doebele shared his plans to convert the run-down property into a haven for bicycle businesses; I envision this as being a very active spacewith of retail, assembly, light manufacturing, and offices. 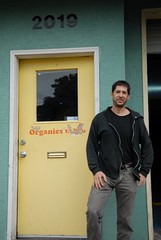 Doebele has a Masters of Fine Arts in writing and his former business was Tandem Scientific, an editing service that helped foreign academics publish their work in American scientific journals and publications. That work paid the bills, but it was a lonely profession and Doebele was yearning for a change.

Back in July, he was involved in a very serious bike/car collision. A few inches either way, he recalled, and I would have died.

That incident led him down the road to the bike business. It sparked an idea for a safety device that hes in development on now (hes secretive, but says it will have something to do with making bikes more visible in traffic). The close call also led him to quit his lonely editing career and purchase Stumptown Mundo a fledgling, Portland-based company that began distributing the Yuba Mundo cargo bike back in May.

Under the business name of Joe Bike, Doebele plans to sell (and eventually distribute) not just the Mundos, but an entire range of niche and utility bikes thats where the Flying Pigeon comes in. 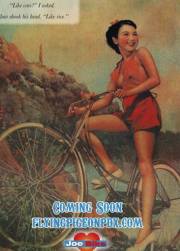 An ad for Flying Pigeons.

Flying Pigeon is a legendary Chinese bicycle brand that is known as the most popular bicycle in the world. Before Beijing become enamored with the automobile, Flying Pigeons were the de facto standard mode of transport. Even Chairman Mao once said everyone should have one.

Doebele traveled to China in September for an up-close look at the bikes which calls bulletproof and quirky with their rod brakes (instead of cables) and Sturmey-Archer internal 3-speed hub.

Doebele has a large shipment of Flying Pigeons on their way to Portland and hes already taking orders. (Watch a video report about them that aired during the Beijing Olympics on NBC at FlyingPigeonPDX.com.)

Along with Flying Pigeons, Doebele will also import a Chinese-made bakfiets cargo bike that he says will retail at about $1,500 (thats half of what the original Dutch version costs) and Strida, a belt-driven foldable bike invented in the U.K.

Doebele says hell focus on offering bikes that are different and that provide really specific solutions.

As he looked around for a place to set up shop for his new business, Doebele said he felt the sting of the credit crunch. At first, banks were lining up to give me huge amounts of credit, but I always declined. Then, by the time I actually needed it, I was offered about 70% less than before.

Looking for real estate, Doebele figured other entrepreneurs might be in the same boat thats when his idea for an incubator took flight. 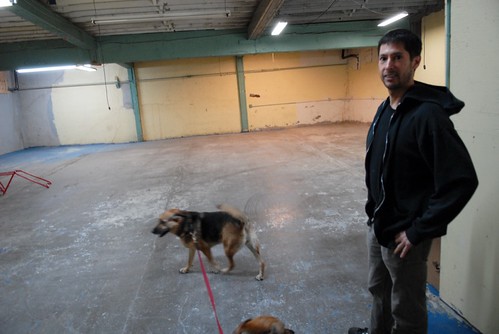 A view of the warehouse. Doebele expects this space to be used for bike assembly and its likely to become home to a framebuilder.

His Joe Bike business is just one of four tenants Doebele hopes will eventually work in the Stumpworks complex. Doebele has big plans to revamp the building which includes four offices, a roll-up access door, a 2,800 square foot warehouse and a wraparound lot (which is across the street from Colonel Summers Park and also will have access from SE Morrison Street).

Doebele is looking for new businesses with small budgets and big ideas and says hell run Stumpworks as a non-profit with the intention to make money selling bikes, not on rent. Doebele says he can offer new businesses an affordable monthly rent (in the range of $6-800), a great location, and a vibrant, bike-focused, collaborative environment.

Erik Olson of newly launched Portland Design Works thinks the Stumpworks idea makes a lot of sense; Its a great idea because it would allow me to work from a central location at a much more affordable rate and be in a place with a lot of creative ideas and like-minded businesses.

It might seem crazy to start a new business like this during a global financial crisis, but Doebele knows if it can happen anywhere, it can happen in Portland. Perhaps bolstered by a recent report that found Portlands bike economy has grown 38% since 2006, or a Wired Magazine article that proclaimed, As America Implodes, The Bike Industry Booms, Doebele says, I feel like the timing is right for this.

sweet! Glad it is coming together! Fantastic idea and a place to think up and develop many more great ideas.

About those infamous rod brakes–Joe Bike’s Flying Pigeons will be built here in Portland with modern caliper brakes, the kind that actually stop the bike. To my knowledge, the handful of other sources of the Pigeon in the US still import and sell them with rod brakes. Not good, especially in wet climates. A front disc brake will be an option. Thanks.

Yep – include me in the list of folks who think this is an incredible idea. 🙂

Bicycle No Longer King of the Road in China/Phillip K. Pan

The incubator idea sounds exciting and I hope it works to inspire and enable people to do some things they’ve wanted to do in the past but haven’t quite had the opportunity until this idea came by to help them out. The FP classics are good looking bikes. If they’re as solid and well built as the wiki article suggests, they should be a real hit around here.

Nice going Joe! I am excited to see your place, the new bikes you are bringing to Stumptown, and to learn more about your dreams for Portland’s bike industry.

This is great – and just 7 blocks down the street. I really think you picked a great location: smack-dab in the middle of a heavily biked neighborhood, equidistant between River City Bicycles and the Bicycle Repair Collective. You’ll have great visibility. Do you think any of your tenants will be doing repairs?