The Oregon Manifest show has come a long way since I last reported about it back in May.

Organizers have nailed down exciting venues, a new presenting sponsor, and an impressive list of over 40 exhibitors (that includes several surprises).

As the official media partner of the event, I’m proud to be your first source for these updates…

The event will take place on October 10-12 at multiple venues. Kicking things off on Friday at the new Leftbank Greenroom in North Portland (1618 N. Vancouver) will be the main event — a bike show like you’ve never seen before. Then, Wieden + Kennedy’s downtown Portland headquarters (224 NW 13th) will host the not-to-be-missed opening night party which is set to feature a, “multi-media builder exhibition” among other things. 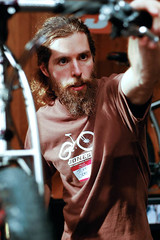 Jeff Jones is among the
exhibitors slated for the show.
(Photos © J. Maus)

On Saturday, the bike show continues at the Leftbank Greenroom. The special event of Saturday is the Rapha Cross Roller Race. If you missed the roller race back in February, you know this is going to be an amazing event. Making it even sweeter is that the winner of the men’s and women’s categories will win a custom built frame of their own and all winners (in each OBRA category) will get a special call-up at the Cross Crusade race the following day.

The Oregon Manifest continues into Sunday with a special Builder’s Exhibition Lap at the Cross Crusade race in Wilsonville. Come out to the race to see those pretty show bikes get put through their paces in classic cyclocross style. 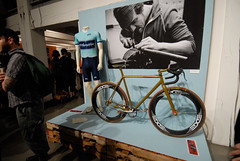 Wieden + Kennedy, who brought us the Teams
of Portland exhibition, will host the opening
night party.

With the schedule set, organizers are also announcing today that Chris King Precision Components has stepped up to be the presenting sponsor of the event. In addition to a financial contribution, the Portland-based company will give administrative help and will assist in show staffing. This sponsorship shows Chris King’s faith that Oregon Manifest will become a premier bike show, and it also gives company founder Chris King an association with something close to his heart — framebuilding.

Chris King himself will be one of the exhibitors at the show. He’ll re-introduce his Cielo Cycles brand he created way back in 1978 (before he became known worldwide as a manufacturer of high-quality headsets and hubs).

Joining Mr. King and his Cielo frames will be a list of exhibitors that includes some names you probably haven’t seen before. Check out the full list at OregonManifest.com.

If the success of the Teams of Portland exhibition and the other events surrounding the North American Handmade Bike Show back in February are any clue, Oregon Manifest should be an extraordinary showcase of bikes and bike culture. Or, as the website says, it will be, “the most original, spirited and spectacle-laden boutique bike show in the nation.”

Stay tuned for full coverage. For now, check out all the goodness at OregonManifest.com.

This sounds like its shaping up to be one excellent series of events. I\’m personally looking forward to seeing in person bikes from Cielo and Hampsten cycles.

Same place the TBA works is at right now.

Portland Design Works is on that \”list of exhibitors that includes some names you probably haven’t seen before.\”

We\’re a new company here in Portland that is going to introduce a line of bicycle accessories in 2009.

We hope to see you at Manifest so we can introduce ourselves and show you what we\’re all about.

This is gonna be awesome!