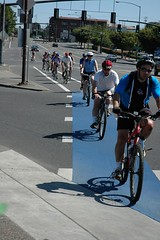 Portland will be part of a
nationwide effort to document
bike use.
(Photo © J. Maus)

For the first time ever, Portland will take part in a nationwide effort to document the number of people biking and walking on our streets.

The National Bicycle and Pedestrian Documentation Project was initiated in 2003 by Alta Planning and Design (a nationally known bike and ped planning firm with nine offices around the country, including Portland). Alta compiles that data through a joint effort with the Institute of Transportation Engineers (ITE).

Alta’s Mia Birk says they approached the ITE because they publish an important journal on vehicle counts known as the “ITE Trip Generation Manual” and Alta wanted, “a comparable document for bike and pedestrian counts.”

Birk underscored the importance of having these numbers during a phone interview this morning: “All traffic and land use models fail to accurately assess bicycle and pedestrian demand because the models are based on data from motor vehicle traffic… In the past, there’s never been enough data for modelers to use.”

“The goal is to build transportation and land use models that properly account for and project bicycle and pedestrian behavior.”

A description of the project published by Alta in 2005 notes that “the lack of documentation on usage and demand” is one of the “greatest challenges” facing the bicycle and pedestrian field and because of that lack of information, “it is difficult to measure the positive benefits of investments in these modes, especially when compared to the other transportation modes such as the private automobile.”

Birk says about 30 cities around the country are joining in the counting effort.

The City of Portland’s Office of Transportation (PDOT) is seeking volunteers to help count at 25 locations around the city. The counts will take place from September 9th to the 14th.

[Note: These counts are separate from PDOT’s annual bike counts, which are going on now at 140 locations around the city.]

This is some of the most important baseline data needed as we bike to the future, document use and request funding for needs etc. Keep at it, Mia.

not only do we need good baseline data on useage, but engineering models need to be revised to include bicycles as an element of traffic. I\’ve seen PDOT\’s traffic modeling for projects like the Hawthorne Plan, and cyclists are not accounted for at all, as if they didn\’t exist…

Why aren\’t streets also graded as to \’level of service\’ for cyclists, based on a combination of factors such as the presence of infrastructure accomodations for cyclists or the lack thereof, and the safety of the street for cyclists?

Streets without bike lanes or streets with substandard door-zone bike lanes and the like should recieve low level of service ratings for cyclists and be slated for improvements.

Yer observations and suggestions are spot on and truly important. If the designers and engineers and officials working on the streets are listening.

I did traffic motion study (data collection – not design) for years. The incidence of people coming up to me wherever I was situated to observe vehicles (incl. bikes) through an intersection and launching a tirade (oft revealing a misunderstanding of extant traffic controls – and I don\’t mean you!) about what needed doing right there at a given intersection was high enough that I was able to generate several well-received cartoons for the co. newsletter. The sketches depicted citizens from all walks o\’ life queuing up to speak their minds to the poor tech doing the count, usually blocking the tech\’s view or gesticulating wildly in remonstration, etc.

Clearly, pitching in for a count or two in either (or both) volunteer ops PDOT has put calls out for this summer is a chance to give back to Stumptown and a chance to participate in building its ever-lovin\’ bike future. Imagine if throngs of articulate bicyclists showed up at public PDOT meetings and presented their experiences and observations as concisely as you do above!