“The most original, spirited, and spectacle-laden boutique bike show in the nation.”

That’s the vision of an ad-hoc coalition of Portland framebuilders, bike lovers, and creative professionals that have come together to create Oregon Manifest — a new event coming to Portland this fall that just might re-define the traditional bike show.

Why “Manifest”? The organizers liked the idea of a Portland (and Oregon) manifesto about bike building and culture; a “manifest” is a term sometimes used to describe a list of checkpoints in an alley-cat race; “mani” is Latin for hand; and “fest” for festival.

The show is slated for October 10-12 and will take place in the newly renovated Multi-Craft Plastics building (now known as the Leftbank Project) between Broadway and Weidler Streets near the Rose Garden.

“This is no mere bike show. It’s a celebration of everything Portland loves about handmade bikes, their builders, and the culture surrounding them.”
— from an announcement of the Oregon Manifest event

At its heart, Oregon Manifest will be a bike show to display the craftsmanship of hand-built bikes — but organizers are quick to point out that the event won’t look or feel like anything done before. They say the show will go far beyond the traditional booth-and-table display and impersonal, convention-hall feel of existing bike shows.

The idea is to capture the tantalizing mix of Portland’s bike culture, and wrap it around the builders and the bikes they create.

At a planning meeting a few nights ago, Shannon Holt — a graphic designer who’s working on the creative direction of the event — said she hopes Oregon Manifest, “shifts the narrative of what a bike show can be.” 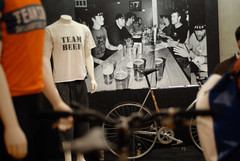 The Teams of Portland exhibit, which celebrated
the culture behind the bikes in a museum
setting, was one inspiration for the Oregon
Manifest event.
(Photo © J. Maus)

Many details are still being worked out, but so far organizers have revealed that the event will have a strong tie-in with a Cross Crusade event happening the same weekend (there are talks of a possible handmade bikes category) and it will have a strong focus on the colorful and distinctive culture that surrounds bikes in Portland.

Another idea being discussed is to display the bikes in their natural setting (think of a diorama in a natural history museum) — blurring the lines between builders, bikes, and show attendees.

The OregonManifest.com website (which was just launched last night) includes a list of things that are symbolic of the Portland bike scene: “midnight cruising, freak bikes, bakfietsen, Zoobombing, the Sprockettes, Stumptown coffee, Team Beer, serious fender bikes, track racing, Cycle Oregon,” and others. Following the list are the words, “This is our manifest. Join Us.”

Oregon Manifest will also be open to bike builders and bike industry vendors from across the nation — but all exhibitors will be steeped in the show’s spirit before showing up and will be encouraged to participate accordingly.

Assisting in the creation of the event are a wide range of groups and individuals including; the Oregon Bicycle Constructors Association, global ad firm Wieden+Kennedy, Portland-based clothier Rapha, local framebuilders, promoters of the Cross Crusade, and local parts manufacturer Chris King Precision Components.

Austin Ramsland, one of the show’s organizers, said so far the event has funding and support from Commissioner Sam Adams’ office and the Portland Development Commission.

Looking at this logo I\’m suddenly thirsty for a Rogue beer!

Looks great. I am so curious about what defines a \”serious fender bike\” as opposed to a bike with fenders. My guess: no plastic, and custom leather mudflaps are a plus.

I think I spent just as much time oogling the bike racks this past year at events like this in portland… There are so many beautiful bikes in town, and they all tend to bring their owners to shows like this. I wonder if the bike parking could be set up in a way to really display the bikes ridden to the show as well. Maybe the bike racks could be organized into categories, and they could be inside the building, like a whole other exhibit…

That is a fantastic idea Coaster. That should be suggested to the organizers. I wonder if they have the space?

I think bike parking will be better for the 2009 event.

There is a rear parking lot at the Multi-Craft Plastics building, but wil it be big enough to hold all the bikes parked?!

Coaster #4 has a brilliant idea. There are tons of sweet bikes rolling around that are worthy of display.

dear portland, is it really about the bike?
i grew up in a town that hosted many car shows a year. hot rod, exotic, new, swaps, autocross…
just got watered down. those car shows made me have to appriciate all the things that wer,nt cars.
sorry doods, but where are the lowriders? where are the pedal copters?
you know: the tubes not bought by columbus or tange. the paint not just a way to show off the framebuilder\’s logo.
airbrush much?
at this point i\’d spend my time at a handmade custom widdled wooden pedal boat show that one more \”i can too\” fully fendered, brooks, 650b, fixed, cargo, diy bike show.
exactly what box are these builders thinking outside of?
just making me want to get around by foot.
with the wind in my hair, totally zen like, bro.
mmm… walking

ps i\’m probably gonna throw up if cross crusade had some how much did you pay/wait catagory. or is it a chunk catagory? eff it, they have a unicycle cat.
can someone just kick me in the nuts for bothering with internet discusions.