This article was written by Jessica Roberts. Jessica is the former metro area advocate for the Bicycle Transportation Alliance and now works as a bicycle and pedestrian planner for Alta Planning and Design. She previously wrote about the City of Portland’s bike parking fund. 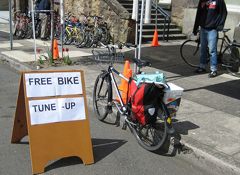 Saturday was the annual free bike tune-up day at Hinson Church in Southeast Portland (you might remember Hinson from the Biking for Jesus article back in March).

Church volunteers partnered up with the non-profit Community Cycling Center (CCC) to help dozens of Portlanders reclaim the spirit of their down-trodden steeds. The scene outside the church included mountains of donated bikes and a line of people waiting patiently for a free bike tune-up.

“We all do what we’re gifted at, and what our group loves is bikes.”
–Hinson Church member Chris Franzke

One woman said she missed the tune-up day last year and hand been eagerly waiting a year to bring her bike in.

Chris Franzke, one of the organizers, explained that the bike tune-up effort is part of a church-wide community service weekend; others were weatherizing houses, knitting caps for preemies, or assisting seniors. “We all do what we’re gifted at, and what our group loves is bikes,” she says.

For all of the organizers, bikes are an important part of their lives. Franzke and her husband have been “married 41 years and biking for 40 of them.” Even though they live in Gresham, her husband sometimes bikes to the church. 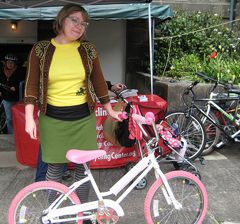 This little pink beauty was one of over
60 bikes donated at the event.

This is the fourth time that Hinson has organized the community bike tune-up, and they say it has been very well received. Organizers see this as a way to give back to the community that surrounds them. Participants were enthusiastic and grateful for the service, and had the chance to meet other bicyclists as well as church community members.

According to Neal Armstrong of the CCC, this event is unique for them, and he credits “super-volunteer” Dave McQuery with making it happen. In addition to providing free tune-ups, a CCC held a donation drive. Neal says the quality and quantity of bikes from Hinson is outstanding.

Armstrong says that yesterday, despite the hail and grey skies, 81 bikes were tuned up and over 60 bikes were donated. “It’s a great event and a great community,” he said. “And besides, it’s my own neighborhood, so I take personal satisfaction in giving something back as well.”

I always have a blast fixing bikes at this event. It\’s so nice to be able to provide for free what can sometimes be prohibitively expensive. Tell your friends to bring their bikes next year!

This kind of thing is awesome.

I live south of Portland in Lake Oswego (the \”middle-class\” part near I-5 where it\’s rare to see a Land Rover or Benzo) and on my rides out and about my neighborhood I see tons of bikes languishing, exposed to the elements, in back yards. I also see kids riding rusting hulks with the the front or rear brakes disconnected because the wheel is so badly out of true or the cable housing has ruptured.

I can imagine the lifecycle of a typical bike– parents buy for kids; kids ride and neglect bike; bike performance degrades over time due to neglect; eventually kid no longer rides bike and begins a life spent in a car.

I keep thinking about holding some sort of free tune up event for MY neighborhood. Get these kids\’ bikes back into a safe and optimal riding condition so they\’ll ENJOY riding their bikes. (A bike os more fun to ride if it fits, doesn\’t squeak and can stop properly).

I think that most folks are intimidated by bike shops– especially when they appear to be shrines to insanely expensive, exotic racing bicycles.

We need more \”community cycling centers\” in every community to support the use of bikes as transportation and fun– not high-end sports/racing.

If the marketroids had their way, Jesus would ride a purpose-built fixie called the \”Holy Roller\”.

Personally, I\’d like to think he\’d ride a self-built bike from parts from the Recyclery, CCC and Citybikes, coupled with a hand-built steel frame.

I\’d also like to think he wouldn\’t stop at one, and that within a few weeks we\’d see Jesus showing up at Zoobomb on his 12\” mini, and at Pedalpalooza on his new tallbike.

\”Look out for that pothole! Whoa, Jesus Saves! What a recovery, I thought he was a goner for sure!\”

I think it\’s awesome that Hinson Church partnered with the CCC, and I really appreciate that they give back to their local community.

Brian (#4) – CCC and Exchange Cycle Tours do a holiday bike collection out there on the first week of December, at the ALbertson\’s out that way. Send me an email at \”execdir\” [at] \”exchangecycletours\” [dot] \”org\” and let\’s talk. December isn\’t a good month for a bike tune-up event, but maybe we can start working on something out there at some other time during the year.

On a bit of a tangent, interesting BBC article asking \”What Would Jesus Drive?\” –

Thanks for all those donated bikes! And it was great to have all the bikers who didn\’t pay attention to the weather forecast.

Any suggestions on making this event better? How else can we work together to make our city better?

Whatever Jesus rides, it would not need lights:)

I think a better question would be \”How else can we make our COMMUNITIES better?\”

What about \”satellite\” CCC\’s to serve other communities?

Get folks on bikes and keep \’em on bikes!

Jim Evernden #8, I\’m sorry I didn\’t have the chance to interview you too — I\’m sure you had some thoughts to add. I just happened to be biking by and thought I\’d stop and chat, and then decided to write an article. Thanks for your help in putting together this great event!

Good insight. Our communities are, of course, interconnected, and one facet of that is HOW they are connected. Whether it is cultural, economic, religious, physical, etc, one would hope that those connections could be strengthened.

Satelite CCC\’s-interesting; talk to Neal about that.