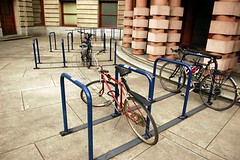 More bike parking might be
needed at City Hall in 2008.
(Photos © Jonathan Maus)

Signs of a bike-friendly future in Portland can be found all over City Hall these days. For example…

Commissioner Sam Adams is going to bat for bike infrastructure improvements and he’s making a serious run for mayor. Adams’ vacated Council seat could go to Amanda Fritz or Chris Smith, both of whom understand the vital role bikes should play in our city’s future.

Also, in an interview with the Willamette Week, outgoing Commissioner Erik Sten told reporter Nigel Jaquiss that in order for Portland to remain the “greenest city in the country” we have to deal with the fact that “we’re gonna run out of oil, and the only way you’re gonna get around is through better land use and alternative forms of transportation.”

And let’s not forget how much Commissioner Randy Leonard loves riding his bike. 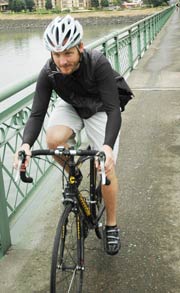 Brendan Finn on the I-5 bridge in July.

And now, with Sten’s announcement that he plans to vacate his seat on City Council, there’s yet another opportunity to make City Hall even more bike-friendly: Brendan Finn.

He also happens to be a daily bike commuter.

As chronicled in this article from the August issue of the Rails-to-Trail Conservancy magazine, Finn rides into work each day on along the Springwater Corridor from his home in Southeast Portland.

I remember riding with Finn on the invite-only Cycle Oregon Policymakers Ride back in July and when I bumped into him at City Hall recently we had a long conversation about bike safety.

I’m glad to see him try and take a step up the political ladder.

2008 is shaping up to be an interesting year.

\”I have to share with you a fairly incredible experience I had this morning on the Springwater Corridor Trail adjacent to Oaks Bottom Wildlife Refuge.
On my morning bike commute in on this beautiful day, I was admiring the many Blue Heron poised in the water. I love our official city bird, so stoic, but I\’m really fond of the Osprey, which have returned from their winter in South America (right?). I often bow and make a little praying gesture as I ride under their nests. What can I say, I\’m a bit of closet bird lover.

So, as I am staring at the Heron, I see a large bird come out of the water with what I think is a fish. I have seen this before and assume it is either a Red-Tailed hawk or an Osprey. Watching it fly away from the water, I notice that it has chosen to perch on utility pole about 300 ft ahead of me on the trail about 15ft in height. I\’m pretty excited at this point because it was an Osprey and I was about to get a great view. Riding under I am amazed at the fish in its grasp and just then it begins to fly right over me. I\’m nervous that I might spill off my bike looking up, but it was just too exciting.

This is when my beautiful friend decided to give me a gift. The Osprey released the fish, and it landed on shoulder and then my back tire catching my quick release, dislodging my tire and bringing me to a complete stop.
Shaking from this incredible encounter, a number of other bike commuters stop to check on me. One woman commented, \”I saw that, did that bird attack you?\” I quickly responded that I thought it was quite the opposite.\”

So, another city council candidate that gets cycling and cares about the environment not bad.

The osprey was obviously practising a little catch and release!

…either that, or Mr. Finn is clearly the annointed candidate.