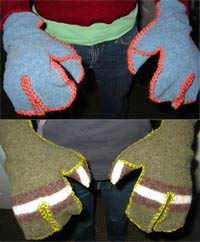 Stay warm in style with S’mittens.
See them and lots more at BikeCraft!

I hope you plan to join us for the third annual BikeCraft this Thursday night (11/15). The assemblage of cycle-inspired artists is something you just won’t get to experience anywhere else.

BikeCraft is on the same night as PDOT’s See and Be Seen Bike Light Parade and there will be a ride going from the end of that event over to the Lucky Lab NW. We’ll be waiting for you!

Here are some exciting, recent additions to the list of Portlanders who will display their wares: 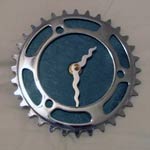 “In 1991 began making lamps from percolators and since I ditched my car years ago, combining bike lights and coffee pots was a natural evolution.”

Dave Stoops is a former bike messenger who also loves bike touring and is active in Portland’s bike polo scene. About 18 months ago he needed a backpack, so he made one for himself. Then he made some panniers and rest is history.

Now Dave works under the Black Star Bags label and his products include custom messenger bags, backpacks, hip pouches, top tube pads, and touring panniers. He’s been offering his bags as prizes at local alley cats and he’s excited to share them with a larger crowd at BikeCraft. 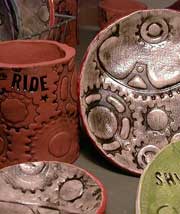 Amy’s pottery and plates pressed with chainrings and other bike motifs have been a BikeCraft favorite since our first year. She sells out quickly, so make sure you stop by her booth first!

Matt is a metal fabricator who’s responsible for many of the bike sculptures you see around Portland (including the figures on the roof of River City Bicycles). He’ll bring his signature table made out of bike rims as well as a few chairs made from bike frames and forks. Sit on one while you have a pint!

Here’s the word from Stephanie:

“I am a long time crafter here in Portland and a lifetime cyclist. This year I’m selling items made from reclaimed woolens including practical and fashionable caps and bonnets, many especially designed to go under helmets.” 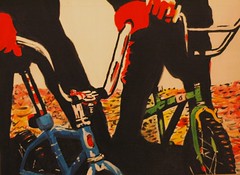 Tiago is a former member of the Alberta Clown House troupe who is now focusing on his artistic career.

In the past, Tiago has created stationary with tall-bike designs, and oil paintings inspired by mini-bikes, the Sprockettes, and more, and most recently he created a wall-sized stencil painting in my office! With so much creativity there’s no telling what he will bring to BikeCraft. My advice is to show up and see for yourself.

These crafters will join the already steller lineup of:

Yes this is going to be awesome. And yes, this is the same night as PDOT’s See and Be Seen bike light parade. Do them both! Here are the details:

Now, help spread the word…email this post to five friends (or download the flyer (PDF) and put it up in your office or on your ‘fridge)! Thanks.

Is it all ages? Can a parent bring thier kid?

I just called Lucky Lab Beer Hall and kids are allowed till 9PM.

Can\’t wait! Thanks for the update and details, Jonathan. Last year\’s event was so much fun that I\’ve been waiting for this year\’s to arrive. BikeCraft is the perfect way to find unique and affordable holidays gifts while supporting local artists and craftspeople. In addition to finding presents for others last year (fabulous reused/screen-printed baby clothes), I bought some gifts for myself (necklaces), which I’ve received many complements on. I\’m sure I\’ll score new treasures this year. I\’ll encourage everyone I know to attend so that they can do the same! Thanks again.

Is anyone interested in going to Bike Craft and then bikepooling to Sellwood, leaving the Lucky Lab at about 9:00-ish?

Re: Annefr (#4) – Yes! As I was riding home tonight, I was thinking about posting the same call for a Sellwood bike-pool home from the event. I enjoy riding on the path at night (nice sliver of a moon this evening), but I\’ll admit that the idea of flatting out on there- alone in the pitch dark, after traffic hours- can be a little daunting. Want to meet at the LL entrance/exit at 9 or so?

Anyone else who is interested would be more than welcome to join in! The more the merrier…and more visible.

erin g.
That sounds good — meet at the Lucky Lab entrance by 9:00; maybe leave at around 9:10. If for some reason I decide not to go (it would take inclement weather) I\’ll try to get an LL employee to let you know. If others would like to join us it might be helpful if they let us know ahead of time via this listing so we know how many to look for. You\’re so right — the more the merrier. It would be fun to continue the Bike Light Parade through the SWT and on to Sellwood!

I want to make this..

Sounds like a great plan to me! This will be fun. I think the more people ride in groups, especially at night, the safer the roads become (in terms of visibility). As more and more people convert to commuting by bike, I\’ll bet that we\’ll see more of this bike-pooling. And it\’s a great way to meet new friends and neighbors, too!

Where might I find those clocks of Liz Dickey\’s?

Hi,
I am trying to contact Dave from Portland who raced in the CMWC/played in the bike polo championships this past weekend in Toronto… I have photos for him but was unable to get an email address so that I could send them. I am pretty sure that he and the Dave Stoops mentioned in this article are one and the same. Does anyone know how I can contact him?
Thanks!
Heather