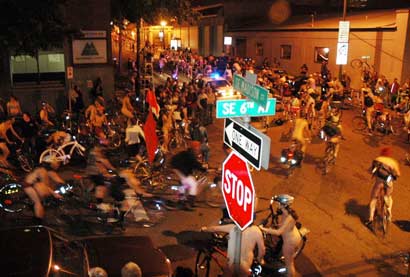 Mob scene at the start of the Naked Bike Ride. View the slideshow below or check out the photo gallery. (File photo)

Last night’s World Naked Bike Ride was completely off the hook. There were more riders, more nudity, and more craziness than I’ve ever seen.

The World Naked Bike Ride is a global event. Now add to that the excitement of Pedalpalooza (it started Thursday), hundreds of your closest (and naked) friends, and a pre-ride Dance Party that set the tone for the night and you’ll begin to get a sense of just how awesome it was. 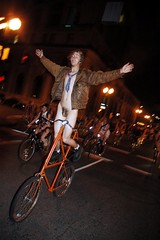 Many people used the free body paints at the party to write things like “Boobs not bombs!” and “My other bike is jealous” on their exposed skin.

People were so excited to get riding (and get naked) that they pulled out from the party prematurely. Masses of riders set off over the Hawthorne Bridge while others still partied away. This meant there was not one, but two huge mobs of naked people on bikes in downtown Portland last night!

Fortunately the two groups connected back up for the final bomb down Burnside…but not before looping and rolling through the entire city.

Along the way, we thrilled innocent club-goers with our audacity, smiles, and private parts. Everyone from frat boys to these repsectable looking sailors had fun just watching us go by. 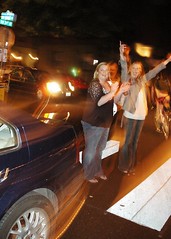 Others weren’t satisfied just watching and you could see them hurriedly stuffing their clothes into their backpacks, eager to join the thonged throngs.

One girl I talked to just pulled into the group after work and was so excited she started taking clothes off while she rode (I encouraged her to pull over to safely disrobe).

I’m off to check out the Grant Petersen Ride. For more nakedness, check out my photo gallery from last night, or view the slideshow below. There’s also a report on the ride on Indymedia.

Were you there? Was it as good for you as it was for me? Did anyone hear of a final head count?

This was my first time naked in public and my first naked bike ride, and it was incredible! I was nervous about doing it and would not have gone if Natallica had not strongly encouraged me to come along. I brought someone who was equally nervous as a \”first date\” and getting naked before the date had even begun got us comfortable quickly! The music, food, drink, and body paint at the party was a ton of fun and zipping through the streets naked was amazing. In a world where we are told to look like abercrombie men and victoria\’s secret women, this was a beautiful celebration of all kinds of body types.

Besides the simple fun of riding in a group and being naked in public…when else do you get to block traffic, ride the wrong way, run lights, strand cars, and have all bystanders and drivers and passengers laughing their heads off and cheering you??? Even the police officers we passed stuggled to keep a straight face! So nice to go on a massive bike ride that\’s a feel-good affair for everyone involved.

I think we made those sailors\’ stops in Portland worthwhile…

This town is amazing! Thank you to all that joined in the nakedness. Here\’s some of my pics, http://www.flickr.com/photos/vanweelden/sets/

It was bleeding GLORIOUS. I woke up this morning to find myself rather depressed that I wouldn\’t be doing it again tonight. Next year I\’m bringing as many people as I can with me. ^_^

I had just moved up here about a month and a half ago, and this was by far the BEST thing that I\’ve done in Portland to date! The ride was euphoric, the dance party was awesome, and everybody- naked or not- was beautiful. I didn\’t even start riding back home until 4am! Thank you Portland!! I\’ve got a smile on my face that isn\’t going away anytime soon! 😀

I had a trully amazing ride. I got to inaugurate my tandem and give a girl who was \’bike-less\’ a chance to join in the fun. It was definately the hilliest naked ride with two trips up to northwest and one up Hawthorne. I know my picture must be plastered on flickr by now.
The dance party was also a great effort and everyone seemed to have a great time.

One sad note, I set my dark blue camera bag down in the clothing check in, and a short while later it disappeared. I\’m hoping that some honest person lets me or Jonathan know what happened to it. The pictures from the kickoff parade and other events are irreplacable, and there\’s a reward for finding it.

It was the most fun I\’ve had on a bike since I was a kid. I\’m with you Martha let\’s do this every Saturday Night. Aaron you might be on flickr here:

Hope you find your camera.

We invited a few friends at the last minute. Some expressed interest, but none were able to make it. Next year we\’ll give them plenty of time to make plans. Let\’s make this thing huge next year. Invite your friends.

Rev. Phil told me his count of naked riders was over 500 … here\’s some video from the night: http://www.youtube.com/watch?v=LFJHxMLCUzc

Holy crap, that\’s me in the blue panties and my friend next to me. What fun that was! I have body paint all over my undies, so next year it\’s totally buff for me. Ha! I loved it, it was the most fun I\’ve had on my bike ever! Though my boobies were a bit chilly…

One of the most incredible things I have ever done.

Why wait til next year. As we all know, riding naked is legal, so why not once a week? Who\’s up for it?

This year was my first WNBR, and I did both rides – day and night. What a difference: 15-ish people and miserable weather in the daytime, hundreds of people and perfect weather at night. The night ride was probably the awesomest ride I\’ve ever been on!

I\’d like to thank everyone responsible for setting up and maintaining the dance party as well. Organics to You, New Belgium, Jasun, you all rock. I volunteered from 11-1, but had some friends cover my shift so that I could participate. Had a really good time.
Thanks again

\”Dozens of bicyclists hit the streets of Portland Saturday night. Many wore bicycle helmets, but not much else. They rode naked.\”

Those guys need to learn how to count.

When Jonathan wrote of last year\’s ride \”It\’s the most fun you\’ll have on a bike all year\”, I vowed that I\’d have to try it this year. He\’s right, I had an absolute blast! The positive energy flowing from the crowd was incredible. This is why Portland is so awesome.

Freakin\’ Awesome! I\’ve never felt so uninhibited before. Sure, I\’ll wear spandex all day long and that doesn\’t really leave much to the imagination, but going the full-buff was quite an adventure.

Woo! Can\’t wait until next year. I wish I could ride that way during the 90-degree days.

Look at the size of that guy\’s leg. It\’s like a tree trunk. It\’s humongous.

Wait a minute….that\’s not his leg.

yup, when I counted the ride going East on Burnside (the final time) while corking in front of the Crystal Ball Room I got a grand total of 525 naked bikers

Glad you are back with us Jonathan.

Check out the blurb from the Portland Tribune and the comments following:

Mr. Know it All

Very nice. Why not one per month?

\”Portland area businesses reported that the unexplained surge in workplace productivity ceased earlier this afternoon, ending just as mysteriously as it had begun two days before.\”

Hey Rev. Phil: I don\’t think the 525 count captured everyone. Some of us ended up back at Organics and thought it was over. I got dressed and started riding home until I caught up with the larger group on 3rd (at which point I stripped and continued with the ride).

Finally finished editing my video of the night: