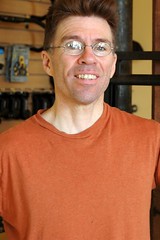 Michael Sylvester has a unique perspective on the Portland cyclocross scene. He was around at the beginning.

Sylvester, along with a small handful of intrepid cyclocross pioneers established the first race series in Portland back in 1985. Yes, that’s over two decades before the Cross Crusade came onto the scene as the world’s largest and put Portland on the map as ground zero for U.S. cyclocross.

Sylvester, a Portland native who at age 49 has never owned a car, started his athletic career as a self-described, “possessed” runner. He was a cross-country standout at Mt. Hood Community College, where he once ran the Sauvie Island Marathon in 2:32:04, more than six minutes ahead of second place and just four minutes off an Olympic-caliber pace.

In the late ’70s he severely injured his foot and decided to take up cycling as a way to rehabilitate. In 1978 he did his first of many long distance bike tours and then started racing cyclocross shortly thereafter.

[In action at the Oregon Cyclocross
Championships at Pier Park
circa mid-1980s.]
Click to enlarge

With his running background and endurance from cycle touring, he excelled at cyclocross and quickly became a perennial favorite in the Northwest and one of the top ‘cross racers in the country.

A true pioneer of the sport, Sylvester raced in parks throughout Portland back when only a handful of Americans even knew what cyclocross was. In contrast to today’s massive, festive races where it’s common for over 700 participants to line up, the scene in the ’80s was quite different.

Sylvester shared an old folder full of newspaper clippings and photographs from his racing career. Among them was a story in the Oregonian (written by none other than Abby Haight) from December 1987 where he said,

“We started out with about 10 riders…everybody was out there on hack bikes they had thrown together.”

[A race at Gabriel Park in Portland shows a typical, early ’80s turnout.]

In 1983 Sylvester suffered his second serious injury that would prove to be another pivotal event in his athletic career. During a training ride he fell and broke his femur. Unable to solve the body alignment problems from that injury, Sylvester found himself drawn to the study of bio-mechanics and eventually yoga.

Five years later, now healed and racing again, Sylvester was once again on top of the U.S. ‘cross scene and in 1988 he was named to the U.S. Worlds Cyclocross team and competed in Switzerland. Based on this experience, it was Sylvester who encouraged a budding racer named Erik Tonkin to venture to the hallowed grounds of European cyclocross. Tonkin wisely took the advice and was named to the World’s team himself last year.

Meanwhile, his passion for yoga did not wane and he became increasingly intrigued by the human body. In a calm and sincere voice common for people that are totally at peace with themselves and their work, he told me,

“Our bodies are fascinating and exciting to work with…there’s so much to learn, it really never ends. The body is incredibly complicated.”

Sylvester’s combined loves of cycling, yoga, and the inner workings of the human body were an, “incredible trilogy of several things” in his life that all came together and allowed him to realize his life’s true calling, helping others find a perfect fit on their own bicycles.

By the late ’80s, Sylvester had become the bike fit specialist for The Bike Gallery and held that position until launching his own bike fitting business, Bicycle Fitting Services, in January of this year.

In the course of his career as a fit specialist, Sylvester has become a nationally recognized expert. He revolutionized the field by improving on the standard “Fit Kit” approach which relied on pre-conceived measurements for fittings. Right from the start, he knew he could improve the system:

“I took a class on it and realized it just wasn’t right. Measurements alone don’t account for individual differences in range-of-motion. I flung the tape measure across the room and that was that.”

Sylvester is openly critical of how many in the bike industry approach bike fitting. He feels more investment should be made in the process by dealers and says,

“Some shops get it, but others are simply lazy…they keep looking for a silver bullet. I think you can either plant a seed and have a great tree, or eat a Big Mac.”

[Battling epic mud at National Championships in 1988 at the Kitsap County Fairground. On the right is veteran local racer David Auker celebrating a win.]
Clipping from VeloNews

In his fitting career, Sylvester has been responsible for many great trees, and his work continues to plant seeds all over the country. Not only is he responsible for developing the the renowned Serotta Fit System—which is considered by many to be the industry standard—but he continues to share his knowledge with others. He’s got an open-source attitude about his work,

“I want to give my knowledge back and teach as many shops as I can. The more people that get a better fit, the more they’re going ride. A good fit takes away the powerful stigma that bikes are uncomfortable.” 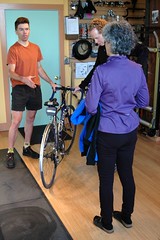 [Sylvester and a client
in his fitting studio.]

As his reputation grew, Sylvester could no longer work out of a corner of the Bike Gallery showroom. Today, he works his magic in a brick walled, bamboo floored, custom-equipped studio with huge windows and views of downtown in the R.J. Templeton building just south of the Burnside Bridge.

Next door to Sylvester is the shop of frame builder Natalie Ramsland. Not knowing who he was, Natalie bumped in Michael in the hallway one day and, realizing he was a cyclist, asked if he knew anyone that could tell her about bike fitting. He has since taken Natalie under his wing and they work together regularly.

Today, Michael is busy growing his business and teaching fitting seminars in bike shops around the country. On November 11th, he’ll teach his Art and Science of Bicycle Fitting in Portland at the Gudmestad Yoga Studio (3903 SW Kelly, Ste. 210).

Next time you’re feeling uncomfortable on your bike, give Sylvester a call. You’ll not only gain insights from a respected fitting specialist, but I’m sure he’d enjoy sharing more of his memories from Portland’s rich cyclocross history.

My once aching back says thanks Michael. 3500+ pain free bike miles a year for the last 3 years. Faster, safer, happier.

I’d like to add that Michael has inspired a lot of “regular-folk” not just elite cyclists like Erik. Michael’ passion to the sport always set an example for me and inspired me to find the best in myself. Cheers to him for his dedication to all cyclists fast or slow.

Michael fit my bike shortly before he left Bike Gallery. Fitting is not an exact science; Michael’s intuition and experience lended me a perfect fit from the get go.

How wonderful for someone to see and recognize what Michael has added to the cycling community here in Portland. As a matter of fact what would the community be without Michael? His enthusiasm and excitement is infectious, he has encouraged and taught us all very much.
Keep at it Brother!!!

Michael doesn’t just tweak people to fit their bikes–he actually PAYS ATTENTION to what his clients’ bodies do when they ride, and adjusts bikes around their needs.

I will be contacting Michael as he fit my wife on her Cross bike and she loves it. First time in her many years of riding that she feels confident and GOOD.