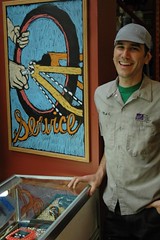 34 year-old Matt Cardinal has had two life-long passions; bikes and art. He’s been drawing and riding as long as he can remember.

I first saw Matt’s chalk drawings at the downtown Bike Gallery during the Trek Portland launch party. Ever since then I’ve been trying to connect with him and learn more about his work.

If you’ve ever been into the Hollywood Bike Gallery store (on Sandy Blvd.), you’ve probably seen Matt’s chalkboards drawings all around the shop. He’s done six of them since last summer. He’d like to do more, but his job as one of the shop’s mechanics keeps him too busy. 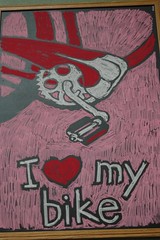 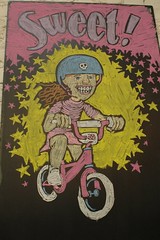 Matt’s role as the shop’s official chalkboard artist came about sort of by accident. The chalkboards were initially used as signs to tell customers about upcoming events and shop specials. As Matt stylized them more and more, they eventually turned into full-fledged drawings.

Besides being an experienced rider, mechanic, and frame builder (he has worked with Sacha White at Vanilla Bicycles), Matt is an accomplished artist. He earned a painting degree from the Pacific Northwest College of Art (PNCA) in 2002, and has a painting in the Visual Chronicle of Portland Collection.

He was also selected to decorate one of 30 panels that will adorn a new building being developed on Burnside Blvd.

When he’s not working on bikes, or drawing them, he’s busy with his new bike club, RaceCard. Matt organized RaceCard to encourage people to try different cycling disciplines. Each member has a card and that card gets hole-punched for each type of cycling event they compete in.

The club’s 20 members are mostly Matt’s friends and Bike Gallery co-workers but he hopes to grow the club this season.

You can see more of Matt’s chalkboard drawings in my photo gallery.

I’ve always wondered about those great chalk drawings! Thanks for the profile.
I have a couple photos of his chalk drawings (Santa on a BMX and Ga toch fietsen!)
at http://www.flickr.com/photos/vj_pdx/tags/mattcardinal/

Hello,
Thanks for the article. The chalk boards look really nice all lined up together. I’d like to clarify a couple things: I’m not a frame builder. I am very interested in building bike frames, but haven’t put one together yet. And I’ve made around 20 boards so far. A lot of them got erased early on, but we’ve started to save them.
Thanks again Jonathan, It was nice meeting you. I think bikeportland is a great resource for the cycling community. Your hard work is appreciated.
-Matt

Hey,
Great article…of course I know how talented you are! Madison loves your drawings, too!

What talent you have! Thanks for sharing
your beautiful gift for drawing with all
of us!

What a cute photo! Awwww, shucks & I like the chalkboards, too!

Clever name on the bike club.

What a talented guy! Thanks for covering this story.

Matt also did the drawing on the bike gallery shopping bags and soon-to-be-available t-shirts.

Great art work. Hope to see it some day.

Good article. We like Matt’s work, too. Can’t wait to see the t-shirt.

I came across this article and was happy to see you are still involved in bikes and art. You got me into biking back in High School. It puts a smile on my face to see you still doing what you love.

Hey, Matt, we got the blue t-shirt. Love it … proud to wear it. Love your art!
Jeanne and Paul