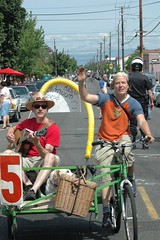 On Saturday me and my ladies rode over to Alberta Street to check out the annual Art Hop. The picture-perfect day attracted all sorts of folks riding all sorts of bikes. And, as usual, I couldn’t keep my eyes (and my camera) off them.

I noticed some old favorites in action like the Clownhouse’s Spin Bike, which Dingo said is sadly, “on its last wheels”. This bike is an engineering feat and one of the most fun things I’ve ever pedaled. Another old fave is Bethany’s grass bike. I first saw this scintillating creation at the Bunny on a Bike Ride and it was good to see it (and Bethany!) again.

It’s always a pleasure to see Sara Stout and her truck bike. Sara had the pleasure of toting around a guitar-strumming Timo as he sang a new tune called, “Carefree and carfree.” Following Sara were the other 2/3 of the Trash Mountain Boys, Wes and Ben. They got a ride on Tom’s super long cargo bike which I first saw carrying an antique stove at Debbie’s Bike Move. 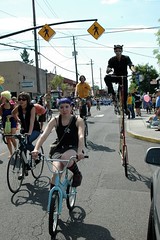 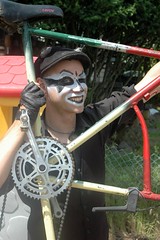 I also saw a bunch of new, creative rigs. Master mutant bike builder Topher was seen pedaling his daughter around on this fantastic four-wheeled creation, complete with comfy bucket seats.

Roadkill’s Pirate Bike was parked in the Clownhouse yard and I couldn’t resist taking it for a spin myself.

Zoobomb webmaster Felix was happily sporting his new mini-BMX bike in the Parade.

I also noticed this guy riding a Cycle-Truck with a huge cooler full of icee-pops. Sadly, the guy who makes these modified cargo bikes is no longer doing so.

I also saw this, and I still can’t figure it out.

Sometimes, the rider just makes the bike. Such was the case with this lady. She fit perfectly with her cruiser that had a “Bike for Peace” sign on the handelbars. And then there was Justa, whose sunny spirit and flair for style turn any bike she’s riding into a rolling work of art.

I also happened upon Lock, who was doing some recon of the route for next weekend’s big West Side Invite Messenger Alleycat. 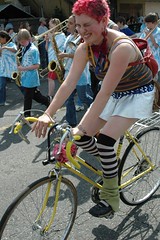 [A wink from Justa.]

And finally, the highlight of my day was riding a super tall, tall-bike. Roadkill calls it the “Triple stack” and the seat is at least 7 feet high. It took me about 4 steps to climb up it before I could even sit down and pedal. I wasn’t even sure I’d be able to mount it, but after a few minutes of trying…I did it! It was a huge thrill to overcome the fear and finally mount this thing. Once safely pedaling, I smiled so much my face hurt.

It was a bit nerve-wracking to realize that 1) I wasn’t sure how to get down and 2) the bike has no brakes! To get an idea of how tall this bike is, here’s a photo of Roadkill riding it in the parade.

What I thought was really nice was all the bikes suddenly joining me behind the Trash Mt. Boys in the parade which up until that point had a bit of a gap. It was wonderful to have “the best seat in the house”, on my bike, listening to their live performance as we rolled down the street. And many thanks to the weather goddess as well.