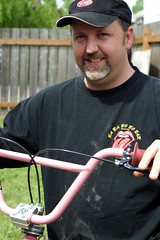 Over 20 years ago, 40 year-old Northeast Portland resident Gary Sansom was a top BMX racer. Like many guys his age (including me), he grew up wanting to be a BMX superstar. Eventually (also like many of us) he grew up, got a “real job”, and got on with his life…but his love for BMX never really went away.

A few years ago, while working at a dot-com in downtown Portland he realized it would cost $100 to park his car. Gary thought, “screw that, I’m going to ride my bike.” He hopped onto eBay to find a bike and instead found an obsession of collecting BMX bikes. 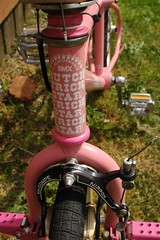 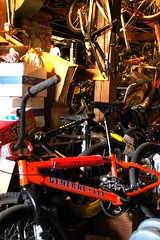 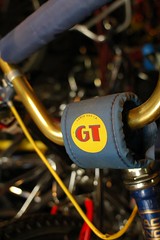 Gary is the founder and sole-proprietor of the website, BMXMuseum.com. The “museum” is actually his basement that is covered from floor to ceiling with over 300 rare and vintage BMX bikes and frames.

As Gary showed me around his collection I asked how it all came to be. “I don’t know,” he said, “it sort of started as a quest to find the ultimate bike that just grew over the years. Once I discovered eBay, it was all over.”

Gary’s not sure what he should do with his amazing collection. He’d like to maybe become a non-profit and “put ’em in the Smithsonian or something.”

BMX bikes are definitely a part of the America’s cultural heritage. In the mid 1980s BMX bikes swept over the country (“BMX” in Wikipedia). Whether it was flatland, freestyle or racing, thousands of kids dreamed of owning bikes by companies like Hutch, GT, and Redline. Like many of the collectors he buys from, Gary loves the nostalgia. He likes to say, “What kind of bike did you have as a kid? Chances are, I’ve got one.”

For Gary, the bikes aren’t just an obsession. He doesn’t fuss over them or treat them like works of art. They’re all meant to be ridden and Gary’s eager to pull them out of the basement for test rides. For Gary, “they’re an outlet, they still give me the same thrill and sense of freedom I had when I rode them as a kid.”

Each bike is significant to Gary and I got the feeling he could tell me a story about each one. My favorite was an all-original, all-pink, 1984 Hutch Trick Star. Back in the day, this bike sold for about $600 but Gary said it is extremely desirable and could easily sell for over $3000 today. I think it’d make the ultimate Sprockette bike.

In addition to his daily perusal of eBay, Gary runs an awesome resource for BMX-philes called BMXMuseum.com. On the site, people from all over the world upload photos and discuss their classic bikes. In addition to the website, Gary makes very cool valve caps out of old toys and other found objects.

You can check out more photos from the BMX Museum, or get in touch with Gary to learn more about his collection.

Dammmmmmn, The Sprockettes sure would love a turn around on that pink BMX!

Maybe you would be will to help me???
I have 2 BMX bike I have bought for me son in the last year. Both are rare bikes I think?
I cant find any info on the net about them.
First one is a 1980s Race Inc bike, with first generation z rims on Sun Coast hubs, Maxi Cross 3 piece cranks, Diamond back goose neck and handlebars, and KKT peadals, all early 80s.
The 2nd one is a Gravity Games FS360, all of it including the tires.
The reason I send this is Iam a collector of old and odd things, and I would hate to see them get abused if they should be in a muesem.
PLease inform me about these if you have time thanks.

Hey,
the race inc sounds very intersting,
the other not as much.
please email me if you wbnat ot sell?
bmxmuseum@gmail.com