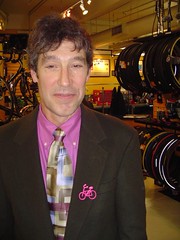 City Transportation Planner Paul Smith just submitted a guest post over on Sam Adams’ blog. It’s in response to a “small but vocal” group that has been giving Sam flack because they think bike projects get too much love in the transportation budget.

Sam has asked Paul to look more closely into this and come up with the hard numbers. Not surprisingly, it turns out that bikes receive only “a tiny fraction of PDOT’s total budget” according to Paul.

So why is there a perception that bikes are getting a huge share of money for infrastructure projects? Perhaps it’s because bike projects tend to be high visibility facilities like bike lanes and bike parking. On the flip side, motorized vehicle improvements – like earthquake retrofits, repaving, and bridge improvements – are less tangible. Or, maybe some anti-bike spending groups simply don’t think of bicycles as a viable transportation choice. They are still stuck in the thinking that bikes are just for kids and Sunday rides to the soda shop. If you only ride your bike in the driveway, than a few million bucks (which isn’t much in transportation infrastructure terms) seems like a lot of money.

I wonder if this “small but vocal group” is the PDOT maintenance bureau? In a recent PDOT budget survey, the maintenance bureau repeatedly put bikes way down on their list of priorities (this alone is cause for concern).

Or, maybe this “small but vocal group” is the same group of insiders that forced ODOT to exclude bike facilities from the St. Johns Bridge?

Whoever they are, they seem to have the Commissioner’s ear and we need to let them know they’ve got nothing to be afraid of. Bikes are just a fun, cheap and healthy way to move around the city. And by the way, Copenhagen, “The City of Cyclists,” spends 25% of their transportation budget on bike facilities!

Jonathan, “…if you only ride your bike in the driveway…”
ha ha funny. I’ve always thought that the big mouths who offer bicyling “tips”, from the security of their steel and plastic tombs, and say when challenged, “hey, I ride a bike”, equate pedaling around the block with bike commuting.