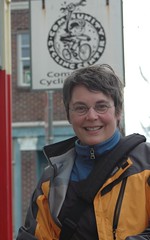 Last week, the Community Cycling Center named Susan Remmers their new Executive Director. Susan (known as “Remmers” to friends) was an unknown quantity to me so I wanted to find out what she’s all about.

Why do I care who’s in charge of the CCC? Well, as a well-known non-profit and retail bike shop, the CCC is an integral part of our bike community and their leader can have a big impact on the Portland bike ecosystem.

Fortunately, Susan brings an impressive track record to the table. For someone just coming into the job, I was amazed at how composed and focused she was. She spoke with a clear sense of passion and vision to help the CCC realize its potential, and I get the feeling she’ll do whatever it takes to make it happen. Wary of short term thinking, she’s looks 25 years into the future and plans accordingly. And she knows a thing or two about helping non-profits succeed…for the last few years she has worked as an independent consultant doing just that. 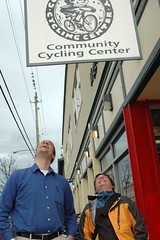 While her background is impressive, I was concerned that she was a bit of an outsider. However, it turns out she’s is not only a bike lover (she owns a Lemond Zurich road bike and a Trek hybrid) but that she lives (fittingly enough) around the corner from the CCC and has donated bikes and parts to them for years.

Susan also understands the mission of the CCC on an intimate level.

In 1987 Susan was in a serious car accident that left her an above knee amputee. For many years after her accident she didn’t ride at all; it’s hard for her to start and stop and the risk of falling was too great. It wasn’t until a few years ago that she got sick of letting fear prevent her from doing what she loved, so she got back on the bike. Now, she rides whenever she can…she’s even ridden on the Alpenrose Velodrome!

Being an amputee gives Susan a perspective that will guide her tenure at the CCC. After all, the CCC is all about improving access and mobility to people that need it most. Giving them not just a charity handout, but providing them with the skills and confidence they need to integrate bikes into their lives.

Since she hasn’t even officially taken over the job yet, I didn’t want to put Susan in a position to speak for the CCC (at least not on record!). But I will say that she was very candid with me when I brought up some historically touchy CCC issues. I came away from our meeting feeling like the number one issue Susan will take on is the high employee turnover rate that has plagued the CCC for some time now.

I’m also encouraged to hear from past and current CCC employees that they are very excited about their initial interactions with Susan.

As I was saying goodbye to Susan, up walked Tom Knipe. Tom is the former interim executive director who was also vying for the top spot. He and Susan have a great relationship and they are working together to make sure the transition goes smoothly.

I look forward to working with Susan and the CCC in what looks like a very bright future.

Can you say New Management? I thought you could.
I hope she can bring CCC around, in a customer service manner, for , I have found, the employees are fabulous, helpfull, and held back by mean, uncaring management.
As a big buyer of bicycle parts in this town, CCC for years has been a regular stop of mine.
I have gone there alot less this year due to a certain management individual……
I beleive CCC has also lost employees due to this same individual. Employees who made it a great place to go shop……
I hope to see great changes at CCC…