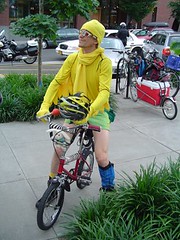 Ladies and gentleman, boys and girls of all ages…the world’s largest festival of bike fun is set to commence June 8-24th. That’s right folks, planning for Pedalpalooza 2006 has officially begun.

What’s Pedalpalooza? It’s two weeks of creative, fun, bike craziness that has happened every year since Portland hosted BikeSummer back in 2002. To get an idea of how big and amazing this event is, look no further than last year’s calendar, which included a Bike Kiss-in, a Clown House Circus, and an Atomic War Preparedness Ride just to name a few.

There’s always an official Kickoff Parade and the whole thing is capped off by the Multnomah County Bike Fair, a “one-day carnival of mayhem, music, a midway of activities and an arena of events.”

Ideas for rides and events are hatching all over town (here’s one of mine) and some of them have already been confirmed on the official calendar. If you have a ride idea, you can add it to the calendar using the new Pedalpalooza 2006 Event Submission Form.

If you can’t wait ’till June, browse through the tons of photos I took last year.

*Update: You can review 40 ride reports from last year’s event by browsing the Pedalpalooza ’05 category.

If you can’t wait for Pedalpalooza, you can get involved in planning now! To find out how you can pitch in, email bikefun ayt shift2bikes dawt org or come to the Shift general meeting on Wednesday March 1st, 7pm, at the Urban Grind Coffee House on Multnomah and

Also, it’s not too early to start planning events. Anyone can lead a Pedalpalooza event, and everyone should! For more information, check out the shift web site (www.shift2bikes.org) or email the address above.

Bikini Ride? Anyone interested in co-planning/hosting a half-naked Sauvies Island tour (to the beach!) ride for Pedalpalooza? It would be like training for WNBR!

I’m thinking PG-13, sunscreen, boombox, frisbee, kites, fair weather only kinda thing. Meet at the Sauvies parking lot at the base of the bridge? You down?

That’s an awesome idea Caroline, and I’m sure many folks would ride out to the Island, which would mean perhaps a bikini bomb across St. Johns Bridge too!

I’d recommend picking a date and adding it to the Pedalpalooza calendar!

Hello, my name is Greg Wilkes. I am a commuter. I work at the Oregon Zoo and live on se 136th. I love to ride to work. Have been there for 12 years.
On my days off, I have a lot of free time and would love to join a group and go out on rides and meet people. If you would let me know when rides are going on, I would love to know about them. Thanks, Greg Wilkes