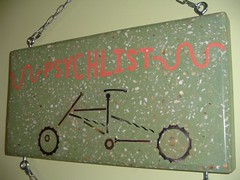 I noticed these cool pieces of art at Urban Grind the other day. The bike-inspired motifs piqued my curiosity so I snapped a few photos and took a closer look. From a flyer posted near the work I learned that they’re, “made from concrete that has been mixed with interesting stones, colored with various pigments, and fused with metal inlay designs.” These metal inlays include screws, drill bits and cogs (check out the large version of the photo for more detail). 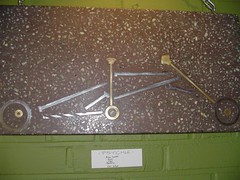 I got in touch with the artist, Stephen Sedlar and asked how he was inspired to use bikes in his work. From the look of the bikes, I figured he might be in with CHUNK crowd, but I was wrong.

The story is that back in the late ’80s he got really into biking and turned his brother onto the sport. Stephen ended up breaking an ankle and losing interest in bikes, but his brother became a top amateur racer in North Carolina. Stephen made these pieces as a gift to his brother.

I think these would be perfect for the next BikeCraft event.