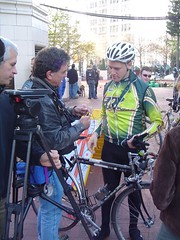 Portland will get 2 minutes of national TV time this Sunday.

Producers from CBS News Sunday Morning (the one with Charles Osgood) flew into Portland last Thursday to tape footage for the upcoming show.

The episode will feature good news from around the country and when the producers got wind of Portland cops giving out lights to cyclists, they thought it’d make a good fit. We’re sharing the limelight with a boy who raised money to adopt a dog and a guy who left corporate life to be a cook.

When I met up with them at Pioneer Courthouse Square they were talking with guys from the Lawyer’s Ride (see photo).

I hope none of the lame stuff I said makes it onto national TV.

Does that mean Mark Ginsberg Goes National? Because that would be hot.

Depends on what footage they use. They’ve got 2 minutes to do the piece and they interviewed 4 people and took a bunch of footage of random bikers…so we’ll see.

The piece on Portland police giving out bike lights instead of citations was inspirational. It is worth following, cost of lights and officers time vs. cost to litigate and paperwork to followup on no shows to court. It will also bring attention to the need for lights for the safety of both bicyclists and the drives/passengers of vehicles who need to see what is on the road. Clearly a good attempt to do what is best and right for the community and individuals alike. Living in Southern California, I hope this is looked at by our city council and police force. Super national coverage by CBS Sunday Morning. Gotta love Portland style.