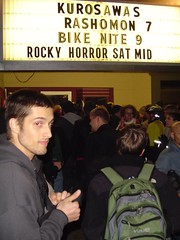 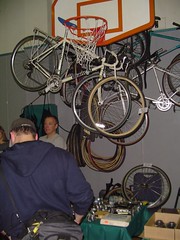 On Friday, when I pulled up to the Clinton Street Theater, cyclists were spilling out into the street and the vibe was electric. Hundreds of people milled outside waiting for a chance to support Times Up! and see a collection of bike movies put together by RevPhil and Sara Stout.

There were bikes everywhere. Several of us ended up just locking up together in the middle of Belmont Clinton Street!

With plenty of beer (donated by Widmer) the scene inside was racuous. The show kicked off with a hilarious short featuring dueling clowns on the infamous Spin Bikes racing to their death around the Alberta St. Clownhouse. The last movie was “Still We Ride“, a documentary about the ongoing battle between the NYPD and cyclists in New York City. It was depressing to see such misunderstanding between fellow humans. Remember folks, bicycling is not a crime!

Then on Sunday, I went down to the PUMP Swap Meet to sell stuff and check out the scene. I met all sorts of interesting folks (more on them later) and it was neat to have so many people be excited about this site (I think I’ll keep doing it ;-))! I sold a bunch of stickers, some shirts and even an old pair of King hubs I had lying around.

A great weekend, made even better by the gorgeous weather! Hope you had a good one too.

The Bike Movies were indeed the social event of the season. Just about all the Bike Glitterati were there. By the end of the evening I could swear I was seeing two of each of them.
But you can tell how packed it was from Jonathan’s post. I was lucky enough to be able to park in the middle of Clinton St.

awesome help from Maggie, Bethany, Mandy, Matteo and others volunteers… how was our service?

bike film night was rad!! deep down inside i was somehow just a smidgen worried the turnout wouldn’t be strong, but jeez was i ever wrong!

p.s. it was nice meeting you.

“Several of us ended up just locking up together in the middle of Belmont Street!”

Wow! I knew that the place was crowded, but crowded enough that folks had to park in the middle of a street almost one mile north of the theater, now that’s saying something! Go PDX bicyclists!

And now, on a more serious note: This movie has yet again brought up how inadequate bicyling is at the SE 26th and Clinton intersection. Though an unusual, bike-themed event like this would obviously max out the bike parking, even during normal times bike parking here is often full. (I should know; I used to work around there and sometimes had to struggle for a place to lock up.) There are quite a few bike “staples” in the hood, so it isn’t neccesarily a lack of committment from neighborhood businesses. Maybe it’s because this intersection is TOO bike friendly? Something more creative needs to be done. I’m surprised a “bike oasis” like the type planned on Hawthorne hasn’t been proposed here yet!

Perhaps that’s something to suggest to City Repair for the VBC6 (Village Building Convergence).

The Portland United Mountain Pedalers (PUMP) would like to thank everyone who came on out (on a perfrect cycling day!) to our Swap Meet.
It’s our largest fund raiser of the year, and we cleared over $1300.00, the kind of cash flow necessary to keep our trails advocacy group rolling along. http://www.pumpclub.org
This event has been going on since 1988, and we’re still learning something new every year.

Many thanks to the local shops and manufacturers who donated such cool stuff for us to raffle and Auction off, which is a massive list, too long to type off now.

We KNOW we had a scheduling conflict with the Cyclocrossers, and we actually had it planned for 2 weeks earlier, but a scheduling snafu with the super nice folks at the Friendly House meant we had to move the date. Thanks for understanding! Next year, we WILL make it on a better date! Look for more involvement with the other bike advocacy clubs too.

See you all at Jonathan’s Bike Crafte Fair and Mixer Dec 7th, the anniversary of Pearl Harbor.