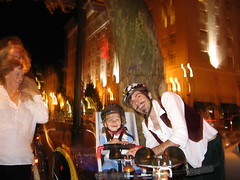 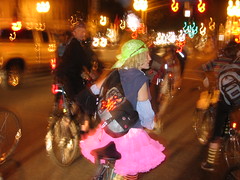 Last Monday was Talk Like a Pirate Day and some local bike pirates took to the streets to celebrate. Below is a report from one such scallywag named Pirate sCarye, aka “Squinty Gunpot.” It’s fun to read…it must have been fun to be there!

“…Twas a wild night indeed – plundering donuts and gurglin’ the grog. We gathered at The Slammer Bar Island – There I met me mateys Fancy Pants the Well Endowed and Smelly Rumpbucket, and many more. I say there were close to 20 of us, but aye, I can only count the fingers on my hands, and that would be nine. (long story!). So at 45 sands past the 7 o’clock hourglass. We be off on our landlubber bikes – we entered unchartered waters in the depths of inner SE across navigational hazards such as train tracks and old brick roads. Me thinks the Captain’s side kick Pirate Arrghh! Allan had one too many grogs when he ordered us on this choppy path. Yar.. on with the story, So our stripey, cross boned- menacing sea-fairing’ swearing group took the night streets, aye, we looped up around and over the Burnside Bridge, and loudly sang “99 bottles of grog.” Before claiming Captain Ankeny’s Pub as our own. Ah was fine night indeed to be out under the stars.”

See all the photos of pirates on bikes.

Hahhaha I love it! That’s great!