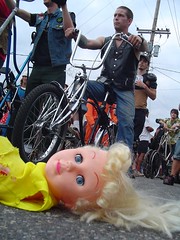 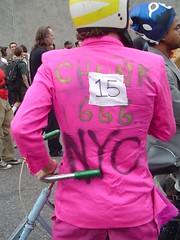 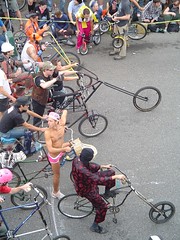 Words can’t do justice to the Chunkathalon. I’ve seen some of the Chunk crew here and there throughout the summer, so I had an idea of what to expect. But when I showed up to Freegeek on Sunday, I was totally blown-away. It was an awesome display of kinetic art and energy and one of the most inspired pursuits of bike fun I have ever witnessed.

The crowd was massive and the competitors were out in full regalia with costumes ranging from Mad-Max-meets-Tarzan to nothing but pink panties. Beer cans and limbless dolls littered the street as mutant bike gladiators with names like “Iron Lord” battled for supremacy in events like the Beer Run Time Trial, the 40oz Relay, the Baby Rescue, and of course, the all-important essay contest (with bonus points for limericks).

Thanks to Oso at Freegeek who hosts this “Burning Man on wheels.” He kept his cool, threw a great party, and let me climb up on the roof to take photos. And of course, a big shout out to Chunk for pulling off the event. You guys make me proud to live and ride in Portland! I’m just bummed I left before nightfall, because I’m sure things got even more out of hand once the fires started blazing. Oh well, guess there’s always next year…

For more of the people and bikes from Chunkathalon 2005, check out the rest of my photos.

Chunkathlon was fun. Especially liked the Last Regiment Syncopated Drum Corp. They also played at the Worst Day of the Year Ride in Feb.

Plug for them: They’ll be helping to kick-off the Time-Based Art Festival this Thursday, Sept 8. LRSD will be leading a pack of artists from Saucebox on SW Broadway to Pioneer Courthouse Square about 7:00 pm.

Hmm. I have to take exception to that “burning man on wheels” remark. Nothing personal, but how is the Chunkathalon, which is a FREE event held in heart of a large city, anything like a hippy fest held out in the middle of the desert, that you have to PAY for a $100 ticket just to attend? A rather attempt to categorize that which cannot be categorized. “Words can’t do justice to the Chunkathalon,” now that’s the rub!

I must echo Silken. Before the Chunkathalon or anything involved with C.H.U.N.K. 666 ever becomes like Burningman, we will ride our bikes into the smelter. We held the event during Burningman this year specifically to make sure that those hippies did not show up.

I hear you about Burning Man and I agree. It just popped into my head so I went with it. You’re right, it’s a totally different scene altogether. Looking forward to the next Chunk event…do keep me posted. And, by the way, does CHUNK stand for something?..because I’ve seen you guys write it both ways (Chunk and CHUNK). Enquiring minds want to know.