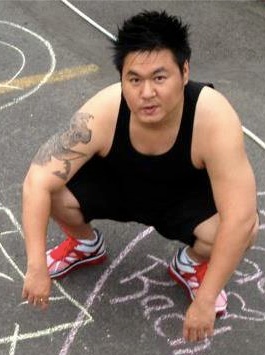 Note from the publisher, 6:14 pm: This story was originally posted described a situation wherein attendees at a ride on Sunday believed they were accompanied by a Portland Police officer named Chris Uehara. After seeing photos of the officer and learning other similarities, I posted a story describing the situation and included quotes from ride participants who believed the man to be Captain Uehara.

I have since heard from the Portland Police that the man on ride was not Capt. Uehara.

In addition, I have also now confirmed that the man was indeed not Capt. Uehara but was instead a man named Krisapon Chaisawat (here’s his Facebook profile). Chaisawat (who goes by Kris) is a 35-year-old food server who lives in Portland and works in West Linn. He called me after his wife saw his photos on this site. He said he’s from Key West, Florida and just moved to Portland a few months ago. Chaisawat said he attended the event after hearing about it on BikePortland and just wanted to go on a ride and meet some people. About the story, he said, “I thought it was an April Fool’s joke.”

For what it’s worth, Chaisawat seemed very understanding of what happened and just wanted to clear things up. The Veloprovo folks feel bad about the error and have reached out to Kris with offers to connect, go on a ride, and/or buy him a drink or two.

“We need streets for people, not more roads for cars. Portland needs to retake the lead as a America’s most sustainable city.”
— from the group’s Facebook page

The latest sign that bicycle activism in Portland continues to take new forms is a new group called Veloprovo, which is planning its inaugural ride this Sunday.

Here’s how the 55-member group describes themselves (via their Facebook page):

“Veloprovo are a group of cyclists and livable streets activists committed to enacting radical changes to the way we design, build, and enjoy urban social space.

We recognize the inherent harm that motorized traffic causes our health and human interactions, and the role that cars play in contributing to the climate crisis.

We realize that without grassroots organizing and activism, we cannot expect elected leaders to make the correct decisions needed to convert roads dominated by cars back into streets built for people.