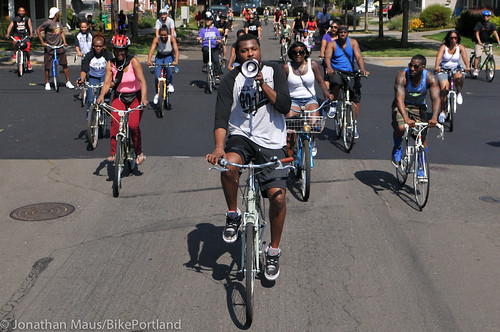 Samuel Thompson led calls for peace on the streets of the New Columbia neighborhood on Sunday.
(Photos by J. Maus/BikePortland)

Reeling from a (yet another) violent summer where gang members have ruled the streets with guns, about 150 people joined the Take Back the Streets Ride in New Columbia on Sunday. Armed with bicycles and a powerful sense of unity, they stood up to their fears. As they pedaled, chanted and smiled, they started a new narrative about the public space outside their doorsteps and showed how bicycles can be an effective tool for grassroots, social change far beyond the central city.