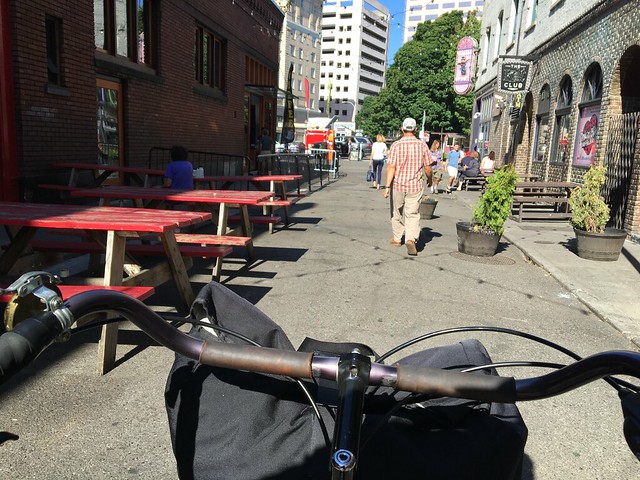 For the first time in over five years you can comfortably ride a bicycle through Ankeny Alley.

Prior to June of 2011 the short, one-block stretch of Southwest Ankeny between 2nd and 3rd avenues was a narrow street with auto parking on both sides. It wasn’t exactly a place you wanted to hang out and enjoy a meal, but if you were on a bike at least you could easily and safely pedal through it.

Then, when the City of Portland decided to ban cars from the block, they also essentially banned bicycle riding too. Instead of a true public plaza aimed at attracting everyone, they made a deal with the bars and restaurants on the street: You let us ban cars and we’ll give you a lot more space for your customers. Ankeny Alley was a huge improvement, especially if you wanted to sit down at one of the many tables and enjoy a beer or a box of famous Voodoo Doughnuts. If you wanted to pass through, you’d have to squeeze by on a narrow sidewalk (which is technically illegal in this section of downtown).