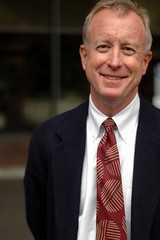 Remember Steve Brown? He’s the independent businessman-turned-advocate who has spent the last two years trying to get a new velodrome built in Portland.

After taking his vision for a velodrome public in December of 2006, Brown admirably worked his idea through the legislature in Salem. He made some major progress, and his “velodrome bill” was even expanded by enthusiastic lawmakers to include facilities throughout the state. It ultimately got stalled in a committee and never became reality, but Brown has not stopped working toward his vision.

I caught up with him at the Get Together event near his home in Multnomah Village on Tuesday night and he shared more about his latest idea.