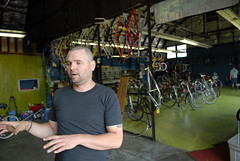 Portland-based used bike shop The Recyclery has closed two of their four locations. The Ladds Addition and SE Madison Avenue shops are now closed, while the St. Johns and downtown Portland locations will remain open.

Owner of The Recyclery, Robby Fenstermaker, confirmed the closures via telephone today. I got in touch with Fenstermaker after several people contacted me saying he had closed all four locations and was planning to leave town with customer bikes awaiting repair. When I shared those allegations with Fenstermaker, he got upset and said that, “After being slandered and totally treated like s***, I’m doing everything I can to keep the stores open.” 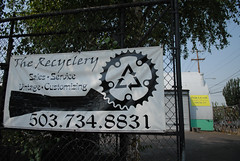 Our story about public accusations of illegal activity by The Recyclery bike shop has sparked a lot of dialogue. Yesterday, I spoke about this issue with Portland Police Bureau Sergeant Troy King who works in the PPB’s Special Property Investigations unit.

One of Sgt. King’s main responsibilities is enforcing Portland’s Secondhand Dealer regulations. I asked Sgt. King if his office has had any dealings with The Recyclery and/or if they’ve received complaints about illegal purchases or sales of stolen goods at that shop. 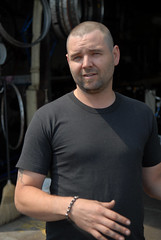 A flyer that has been posted far and wide on the streets of Portland contains allegations that the owner of local used bike shop chain, The Recyclery, “knowingly purchases” and then sells stolen goods.

The flyer contains serious accusations and names The Recyclery’s owner Robby Fenstermaker as being responsible for the alleged “fencing operation.” Fenstermaker says he’s aware of the flyers and maintains the allegations are likely the result of sour grapes due to the success of his business.