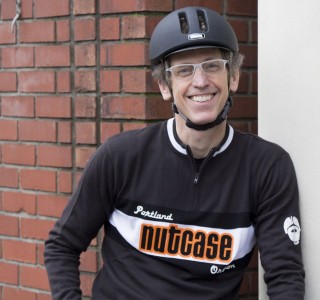 Portland’s bike industry is always in flux. Here at BikePortland we try to stay on top of it because a signficant part our region’s economic development, jobs market, and talent pool is tied in some way to bicycles.

This is big. Portland-based helmet company Nutcase has just hired a big-name CEO. It marks a giant step for the company that had been run by its founders — Michael Morrow and Miriam Berman — since 2006. Not only that, but the new CEO, Scott Montgomery is kind of a big deal. Montgomery comes to Nutcase after being CEO of cycling apparel company Club Ride. Before that he spent over 30 years at Cannondale before leaving in 2003 as its vice president to become the general manager of another bike manufacturer, Scott.

With Montgomery’s experience, Nutcase is sure to hasten its growth and expansion. Next on the company’s radar? “Lifestyle products.”