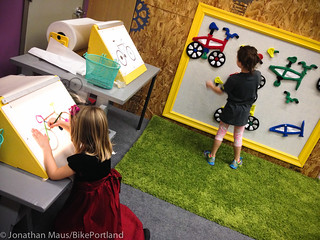 Tracing bikes and a bike felt board are just
two of the fun things to do at the Cycle City exhibit.

Last night my family and I had the opportunity to preview the Cycle City: A Spin on Bikes exhibit that opens today at the Portland Children’s Museum up in Washington Park.

The exhibit marks a milestone for the museum as it’s the first of their rotating exhibits they actually dreamed up and built themselves (instead of simply purchasing something turn-key). It says a lot about both the museum’s leadership/staff and about Portland culture in general that, when given the first opportunity to create their own exhibit, they decided it should have a bicycle theme. 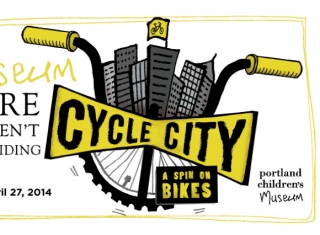 Detail from poster for new exhibit.

The Portland Children’s Museum is prepping for a new exhibit called “Cycle City: A Spin on Bikes“. The museum says the exhibit’s interactive displays will, “inspire the next generation of PDX ‘bicycle buffs'”.

Fresh off the world-renowned Michael Embacher collection making its North American debut at the Portland Art Museum’s “Cyclepedia” exhibition this past summer, bicycling will play another starring role at the Children’s Museum.

According to a museum press release, Cycle City was created with materials donated from local bike shops, designers, mechanics, and riders. Here a partial list of the exhibit components set to open on January 31st: