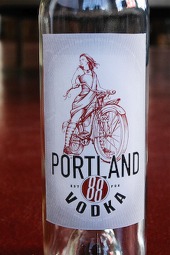 Portland-based New Deal Distillery will unveil a new label for their signature Portland 88 vodka next month.

The label features an illustration of a woman standing valiantly astride a fat-tired cruiser bicycle, sporting striped kneesocks, a flowing dress, and a playing card in the spokes. Think of her as Portlandia (Portland’s patron saint that adorns the City of Portland building downtown) on wheels.

Hoping to learn more about New Deal, I headed over to the distillery one sunny day (it’s right across the street from our office) to check out their operation and see the new label.

That happened to be during the Worst Day of the Year Ride, and the distillery had opened its doors to invite ride participants in for tastings. I chatted briefly with founders and co-owners Tom Burkleaux and Matthew Van Winkle before a bunch of costumed riders came in to sample the lemongrass vodka.