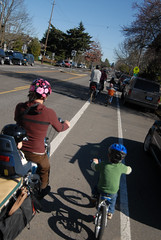 Congressman Earl Blumenauer has introduced new legislation that will create a $2 billion competitive grant program for communities to promote eco-friendly transportation options. The bill, which we first reported on back in December, is now known officially as the Active Community Transportation Act of 2010.

In a statement about the ACT Act, Blumenauer said,

“Too often we take for granted the value of being able to bike and walk to work. It’s unfortunate that many communities don’t have the infrastructure in place to make active and healthy forms of transportation more accessible. The ACT transportation grants will make it easier for people to get out of their vehicles and onto sidewalks or bikes, boosting both heart rates and community vitality.”