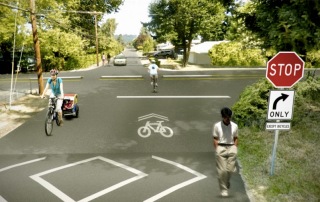 Yesterday, the Oregon Department of Transportation announced the winners of their 2013 Transportation and Growth Management grants. Among them is a $103,000 award that will fund the planning and design of the Monroe Street Bike Boulevard/Neighborhood Greenway project.

While the dollar amount is relatively small, this grant represents a major milestone for Milwaukie, a city on the Willamette River just six miles south of downtown Portland.