– India’s Tata Nano — the small, super affordable “people’s car” — has hit the streets and the showrooms.

– The US highway and trucking lobby has asked the federal government to make an “Eisenhower-like commitment” to new investment in the nation’s highway system.

Time for the news roundup, folks:

– A bad sign for the bike economy? Trek has furloughed 300 employees from one of its plants.

– Is “intextication” the new drunk driving?

– Virginia has outlawed the cul de sac, saying all new subdivisions must have through streets.

– In Millville, Pennsylvania, three police officers caught themselves on video tackling a teenage woman from her bike and beating her in the course of pulling her over for riding on the sidewalk. She was convicted of resisting arrest and has now filed a civil suit.

Thanks to all the readers who sent in tips about items in this week’s news roundup.

– A bill up in front of the Oregon House would add prescription or over the counter medications to the list of intoxicants under the debilitating influence of which it would be illegal to drive.

– Suburbs are dying, says Time Magazine. Do we just let them go, or can they be saved through redevelopment?

Time for the news roundup…

– The New York times calls for people to take the high road while riding bikes. Interesting meditation. Are we losing the PR war? Does it fall on us to change our behavior?

– BikePortland contributor Libby Tucker reports on her blog, Naked Energy, about Mayor Adams’ proposal to set an ambitious “carbon budget” for the city that would include major zoning and parking changes to create a city full of 20 minute neighborhoods.

The joys of walking, breastfeeding while driving, overcrowded bike parking, the case against homeownership, school choice in Japan, and more…

– The Oregonian profiles a Vancouver woman who switched from driving to taking the bus when gas prices went up last year — and kept riding even when they dropped again, even though the bus doubles her commute time. Service changes may push her back into her SUV, however.

– A woman has been arrested in Ohio for breastfeeding her infant while talking on her cell phone and driving her other kids to school. “If my child’s hungry, I’m going to feed it,” she was reported to say.

Time for the Monday news roundup!

– Obama has named Adolfo Carrión Jr. to head the newly created White House Office of Urban Affairs. Carrión, an urban planner by training from the Bronx, has mixed reviews but may speak up for bicycling as well as transit and urban density.

Happy President’s Day to you all. Here’s the roundup for this week:

After the jump: Scientists call for fewer roads; pimp your ride; environmental racism; transit news; and the masked rider speaks!

– President Obama is creating a panel, rather than appointing a single “car czar” to oversee the auto industry bailout and reform process.

– Streetfilms interviewed bike-friendly US Rep Earl Blumenauer of Portland, and the Oregonian picked it up. In the video, Blumenauer urges bicycle activists to “keep the pressure on” Obama about federal transportation spending decisions this year. Meanwhile, at least one voice in the media is calling for stimulus dollars to be put into bike boulevards.

– The Portland Tribune calls Alta Planning principal and former Portland bike coordinator Mia Birk the “Bike Queen” of Portland, and talks about her work, through Alta, on trying to turn Dallas, Texas into a bicycle city. 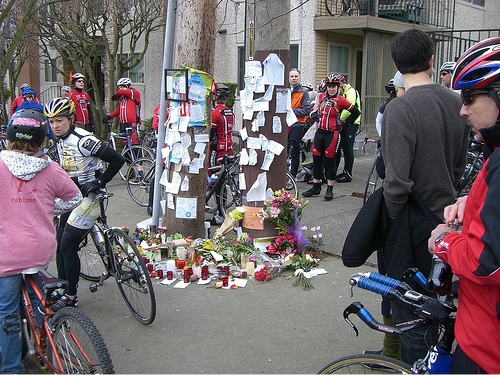 Lots of news this past week. Here we go… 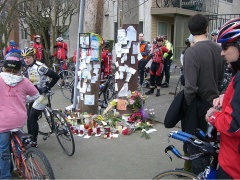 – Transportation for America reports that attempts to strip the transit funding from the federal stimulus package have been unsuccessful — for now. Transit funding still makes up only about 1% of the package, despite increasing calls for investment in rail rather than roads.

– Kevin Black was killed while riding his bike to work in Ballard (a suburb neighborhood in Seattle) last week. Black was a molecular neurobiologist and popular member of a local cycling team. Over 200 people turned out for a memorial ride, and advocates are mobilizing.

The BikePortland office was broken into this weekend and Jonathan and I have spent the morning figuring out what’s missing (and sighing a lot). The damage so far; our backup SLR camera, four Nikon lenses (ouch!), both of our digital audio recorders we use for events and interviews…

What did we get in exchange? A crowbar. Nice. We’re figuring out a plan of action and will keep you posted about a possible fundraiser.

In the meantime, the show goes on — here’s the news that caught my eye last week: 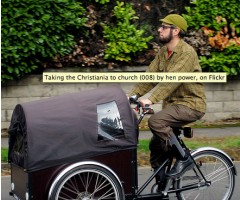 – Inauguration-related transportation was big news last week. The Washington Post’s Dr. Gridlock has published a three part “How It Worked” column, discussing the bicycle, walking, and carfree streets solutions DC used to make the big day accessible to all.

– Sarah Goodyear of the Livable Streets Network has compiled network member blog stories about the upcoming stimulus package and what it includes for transit and rail. Streetsblog has its own cutting analysis of what they call a “1950s-era stimulus package”: “Hire a construction worker, fire a bus driver?”

– First off, some exciting meta-news: our own BikePortland.org has been accepted by Google as a legitimate news source. Now, when you search news.google.com, our stories may come up, depending on your search terms. If you search for “bicycle portland,” a lot of our stories come up. We’ll have a big party to celebrate when I get back to town in a week and a half!

– This Norwegian TV commercial is the first for a group called Miljøagentene (Eco Agents). It features a very young eco-agent fighting the battle against SUVs on a family level.

– There has been a lot of editorial page pontification in the last week about what our cities’ transportation policies should be in 2009. Here are a handful:

A province in Rwanda has banned bicycle use; Maryland police are surveilling a bicycle group