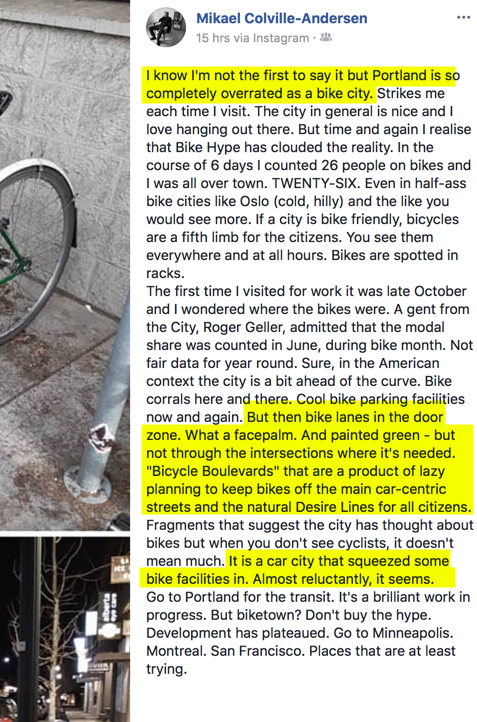 One of the most well-known bicycling and urban planning consultants in the world had harsh words for Portland after a visit over the holidays.

In an Instagram post yesterday, Mikael Colville-Andersen wrote that, “Portland is completely overrated as a bike city” and that “It is a car city that squeezed some bike facilities in. Almost reluctantly, it seems.”

Colville-Andersen was in Portland to visit family; but he couldn’t resist sharing what he saw while walking our streets. The lack of people on bikes in general is what seemed to stick with him most. “In the course of 6 days I counted 26 people on bikes and I was all over town. TWENTY-SIX. Even in half-ass bike cities like Oslo (cold, hilly) and the like you would see more,” he wrote.

Colville-Andersen is known for his Copenhagenize blog, which rose to prominence about 10 years ago for its documentation of the people and infrastructure of one of the world’s most bike-friendly cities. Colville-Andersen has since built his blog into an urban design and planning firm that has completed projects around the world. He has also recently launched a TV series called “Life-Sized City”.

In 2009, Colville-Andersen visited Portland as an emissary of the Danish Embassy. He spoke at an event where he shared the stage with then Mayor Sam Adams. At that event nine years ago, Colville-Andersen said it would only take Portland 5-10 years to achieve what it took Copenhagen 30 years to achieve in part because all the (planning and engineering) mistakes have been made and the case for bicycling is stronger now than it has ever been. He also pointed out that to do that it would take, “visionary political decision-making.”