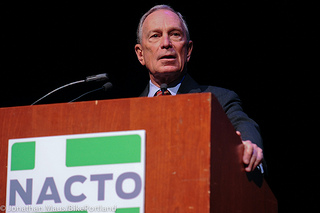 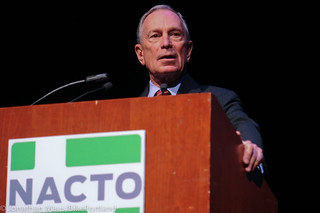 New York City Mayor Michael Bloomberg spoke at the closing plenary of the NACTO Designing Cities Conference today. At an event held at the Skirball Center for the Performing Arts on the campus of NYU in Manhattan, Bloomberg shared his perspective on the role transportation plays in his city’s success.

Bloomberg was introduced by the Commissioner of New York City’s Department of Transportation (and President of NACTO), Janette Sadik-Khan. She hailed Bloomberg’s leadership, saying that, “It’s not an exaggeration to say, the impact he’s had on New York, the nation, and the world will be felt for a long time after he’s left City Hall.”