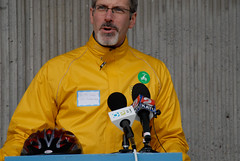 Dr. Kohn, speaking in support of Safe Routes
to School during a visit by the U.S.
Surgeon General in April 2008.
(Photos © J. Maus)

Dr. Mel Kohn has been named the new head of the Oregon Public Health Division, which is set to become part of the new Oregon Health Authority. Kohn had been serving as the acting public health director and state health officer since September 2008.

Kohn also happens to be a regular bike rider who has shown engagement and interest in encouraging the use of bicycles — especially through the Safe Routes to School program — for years.