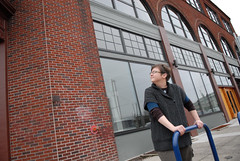 The fast and busy Broadway and Weidler avenues between the Broadway Bridge and Interstate 5 are like two fast-moving rivers that pose a formidable challenge to anyone who dares cross them. These are multi-lane arterials that funnel onto the freeway and the traffic after major events at the Rose Garden is a nightmare.

Smack dab in the middle of that traffic tempest is a calm oasis, a cluster of buildings known as The Leftbank Project. The Leftbank is, on a map, one of the most accessible and central locations in the entire city. Several major bikeways intersect there. But instead of a hub where people gather, the daunting traffic makes it nothing but a blur to passersby.