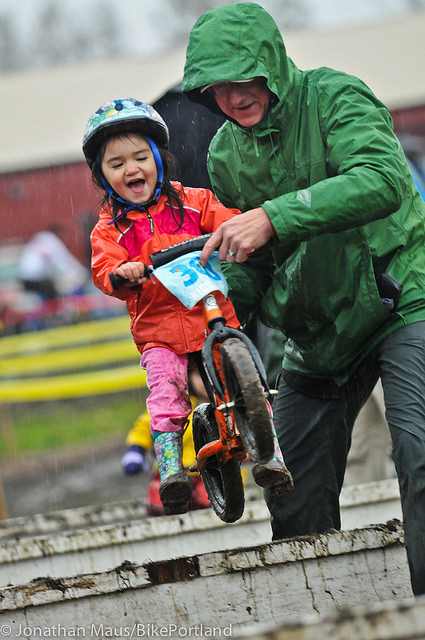 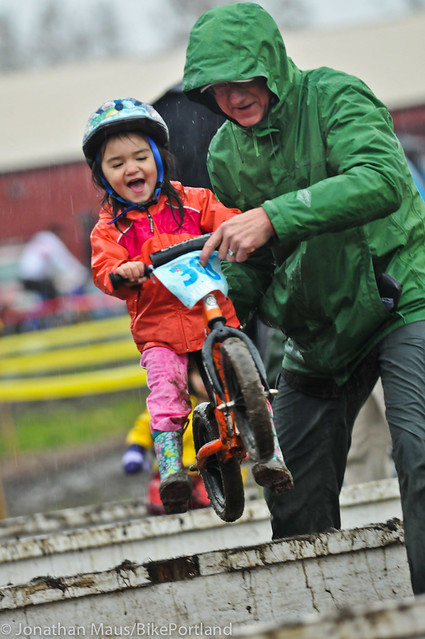 Having the time of her life.
(Photos by J. Maus/BikePortland)

Special thanks to Sellwood Cycle Repair for sponsoring our 2014 cyclocross coverage.

There aren’t many outdoor activities that embrace wet, cold, and muddy weather quite like cyclocross does. That truism was on fine display out on Sauvie Island yesterday at the annual Kruger’s Crossing event. The conditions went from standard mud early in the day, to epic flooding for the later races. There was even a bout of thunder and lightning. 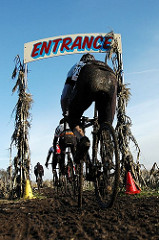 “Staff finds that the bike races are inconsistent with the code criteria and are not an activity that promotes the sale of farm crops.”
— Multnomah County

Multnomah County’s land use planning department has reached a decision in the permit application for Kruger’s Farm. As we reported back in June, the farm stand has hosted numerous popular bike races in the past but those events were in jeopardy after the County received a complaint that triggered an update to Kruger’s land use permit.

A decision made public today by Multnomah County Planning Director Karen Schilling, states that, “Weddings, bike races, birthday parties, corporate picnics, and group gatherings are not allowed as part of this decision.”

Kruger’s Farm Market sits on an Exclusive Farm Use zone and farm owner Don Kruger has added many activities to the land that are not agricultural in nature. One of those uses that came under scrutiny by the county were bike races.