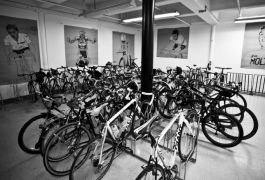 In 2011, one local company gave its employees 216 days in paid time off just for riding their bikes to work.

Offering serious incentives for bicycling is part of a tried and true recipe for success at King Cycle Group, the parent company of Chris King Precision Components and Cielo Cycles — a manufacturer of bicycle parts and bike frames based in Portland’s northwest industrial district. The company was founded by Chris King in 1976 and moved to Portland in 2003. Today they have 94 employees and show no signs of slowing down.