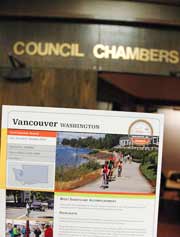 Last night, Vancouver City Council decided to postpone their vote on a new helmet ordinance. The ordinance, which initially sought to only apply to kids under 18 years old, is now likely to apply to everyone.

Jan Bader at the City Manager’s office told me that the Council did not pass the ordinance last night and instead, “sent it back to staff for revisions to make it all ages.”

“We’re going to rework it,” she said, “and look at suggestions from testimony received last night from local bike clubs.” 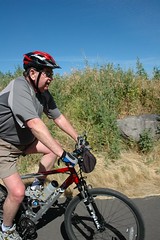 The majority of Vancouver (WA) City Council members are reportedly in favor of expanding a youth helmet ordinance to include adults.

The ordinance was first heard by City Council earlier this month and based on recent comments by four of the seven councilmembers, there is some momentum to amend the ordinance to make it apply to adults as well as kids.

*The Vancouver Bicycle Club is also supportive of an all-ages law. Former club President Joe Toscano told me today that the club wrote a letter of recommendation to Council asking them to expand the ordinance to adults. Toscano said that, “We just think it makes sense that if you have the law for kids, you should have adults setting the example.”