HB 2602, a bill proposed by Rep. Mike Schaufler (D-Happy Valley) that would create a new law prohibiting the use of headphones while bicycling, has been pulled from the schedule of the House Judiciary Committee. As we reported last week, the bill was slated for a public hearing tomorrow (2/10).

Our friends at Eugene Bicyclist noticed the bill had been pulled from the committee agenda and inquired to Rep. Schaufler’s office about it. They got this reply from one of Schaufler’s staffers: “I do not believe there is any momentum for this bill to move forward.” 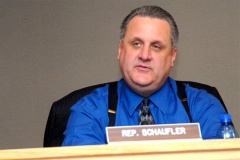 House Bill 2602 (text), which would create a new law to prohibit the use of headphones while operating a bicycle, has just been scheduled for a public hearing. The bill is on the agenda of the House Judiciary Committee for Thursday, February 10th at 1:00 pm. 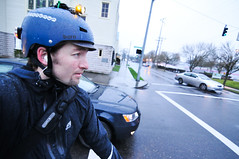 Lost in last week’s kerfluffle about a potential ban on biking with kids, was another bill proposed in the current Oregon legislative session that deserves our attention.

House Bill 2602 (text), sponsored by Representative Michael Schaufler (D-Happy Valley), would create a new traffic violation for “unsafe operation of a bicycle” if a person “operates a bicycle on a highway while wearing a listening device that is capable of receiving telephonic communication, radio broadcasts or recorded sounds.” The offense would come with a maximum fine of $90. 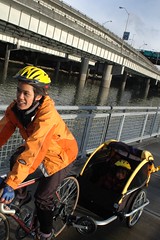 The 2011 session of the Oregon State Legislature officially kicked off in Salem yesterday. While it’s too early for any significant action to have taken place, there are already some interesting bills that have emerged. Today, I’ll share two that have come to my attention..

House Bill 2228 — which I first heard about from the BTA advocacy manager Gerik Kransky — would prohibit anyone from carrying a child under six years of age on their bicycle or in a bicycle trailer. The infraction would come with a maximum fine of $90. The legislation was introduced by Mitch Greenlick, a Portland Democratic who represents District 33 (Northwest Portland/Forest Park).