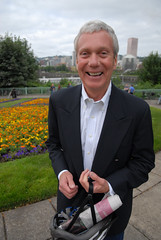 The Oregonian reported last night that TriMet General Manager Fred Hansen has decided to resign from the agency. Hansen has been TriMet’s GM since 1998.

In light of Hansen riding the MAX into the sunset, I checked the BikePortland archives and found that his name popped up several times.

The first time was back in 2007, when he signed his name onto a set of rules that were handed out to Zoobombers during one of their weekly rides. Among them: “No part of a bicycle may block the stairwells or aisles” and “Bicycles must be reasonably clean.”