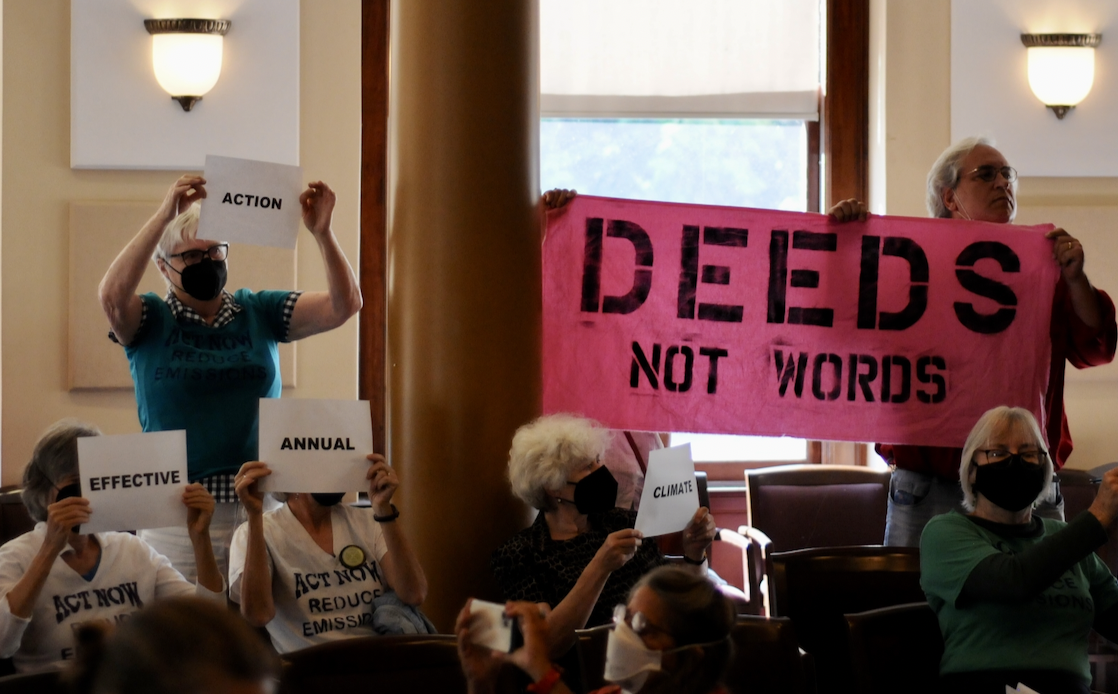 “Deeds not words” was the message a group of activists with Extinction Rebellion PDX had for Portland City Council at their meeting this morning where they voted to approve the city’s Climate Emergency Work Plan.

The work plan is the creation of the Bureau of Planning and Sustainability and outlines actions across city bureaus to cut Portland’s climate emissions in half by 2030 and hit net-zero emissions by 2050. But some climate activists think the plan is too vague, and are concerned city leaders won’t follow their words up with actions necessary to tackle the climate emergency.

Today’s unanimous vote was no surprise – all commissioners (including Commissioner Jo Ann Hardesty who was absent at today’s meeting) had enthusiastically supported the plan at last month’s hearing.

Mayor Ted Wheeler and commissioners Carmen Rubio, Mingus Mapps and Dan Ryan addressed the activists at City Hall today and acknowledged the city’s climate actions lack some transparency. Wheeler asked BPS director Donnie Oliveira if there were steps the Bureau could take to better show the public how the city is progressing with its plans.

“Is there some way that we can make this easy for people to see what we’re doing?” Wheeler asked. “We’re very invested in figuring out where the gaps are.”

Oliveira said the Bureau is working to improve on this front and will keep it in mind as they move forward. Activists said more communication would be helpful, but it won’t be enough if they don’t have strong action plans in the books.

“It’s not only how are they communicating to the public, but what in fact are the serious actions that the city is willing to take?” Extinction Rebellion PDX member Janet Weil told me after the meeting. “There’s a lot this plan is missing.”

Weil said the plan is particularly weak concerning transportation, adding that the City of Portland has not shown they will stand up to the Oregon Department of Transportation where climate action is concerned. Earlier this summer, City Council voted to support ODOT’s I-5 Rose Quarter expansion project as well as the plan to expand I-5 across the Columbia River, which some climate activists say is not in line with their climate emergency declaration and promises for city action.

Despite these disagreements, the mood at today’s meeting was mild. City Council members have become experts at acknowledging the many people who oppose their decisions. The Extinction Rebellion activists held up signs urging action at the meeting, but did not cause any disruption. All commissioners and Mayor Wheeler said they were grateful for their community involvement.

Steve Dear is a member of Eugene’s Extinction Rebellion chapter who came to Portland to support the demonstration today. He said people from across the state need to see the City of Portland taking strong climate action, and wanted to be part of the movement encouraging them to do so. He told me he was surprised to see such a collaborative attitude from the commissioners.

“I felt like Council co-opted our message. The mayor enveloped us with his words and acted like we’re on the same side,” Dear said. “But I don’t think we want the same things.”