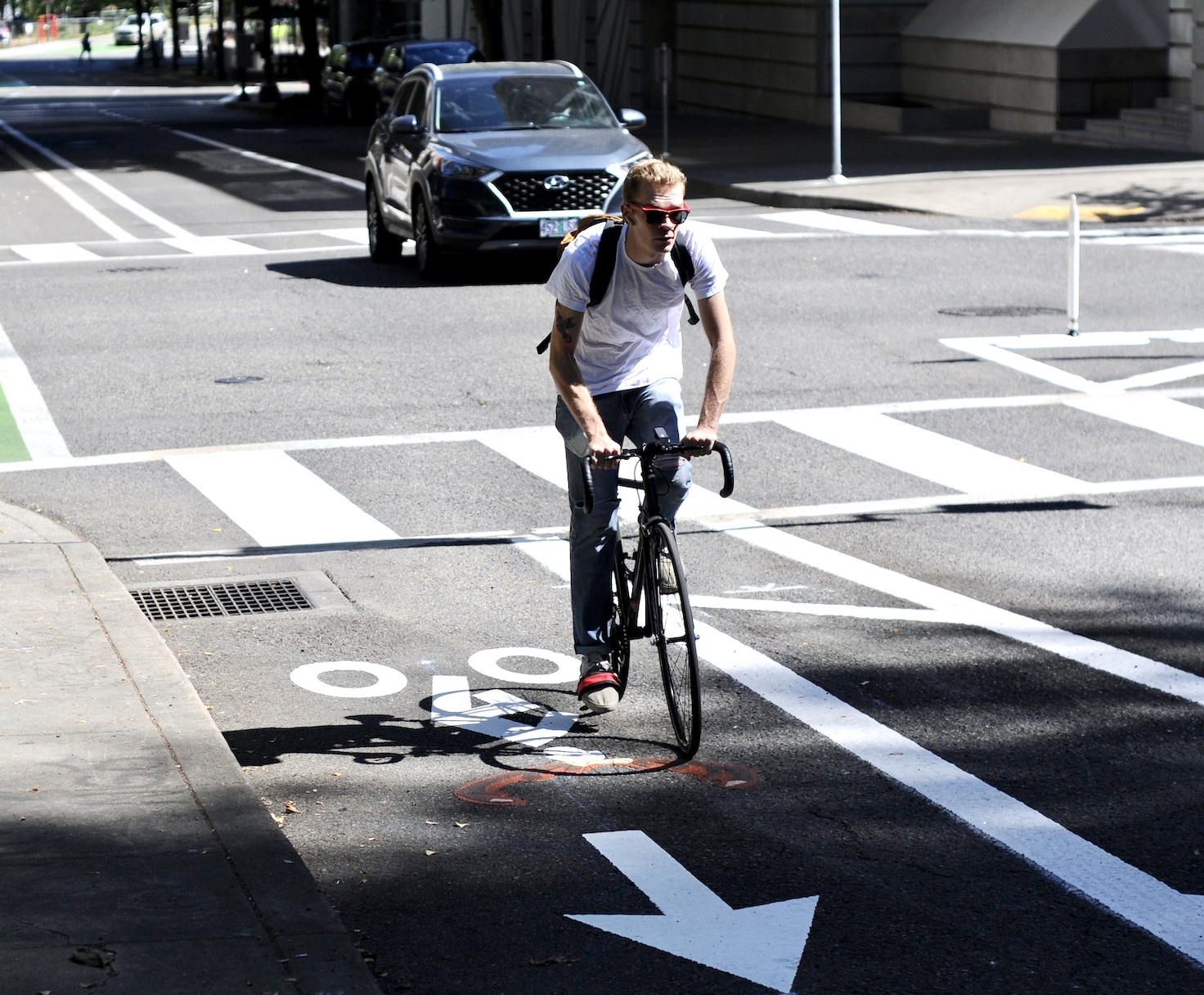 The Portland Bureau of Transportation made some long-awaited changes to SW Main Street between 3rd and 4th Aves in downtown Portland last weekend. This stretch of Main is known for housing the Thompson Elk Fountain – a bronze elk statue perched atop a large fountain base – for more than 100 years before the city moved it to storage for safekeeping during protests in summer 2020. But earlier this year, the city announced they’d be bringing the statue back to its home base, and its homecoming would grant the Portland Bureau of Transportation the opportunity to install a bike lane on the block.

While a one-block bike lane may not seem monumental, its absence here left a meaningful gap in the downtown bike network. SW Main connects directly to the Hawthorne Bridge’s westbound exit, making it the most direct route from the bridge to places like the South Park Blocks.

Prior to this project the first two blocks of SW Main were equipped with bike lanes, but they dropped off at 3rd avenue, leaving people biking to merge with car traffic for a block. This added a snag to the bike route, and with PBOT’s $16.9 million SW 4th Ave Improvement Project on the way, closing this gap was a high priority.

PBOT’s first proposal for the elk statue restoration/bike lane construction project involved swapping the elk’s old fountain base for a new, smaller podium without a fountain that would make space for the bike lane and two lanes of car traffic. This news was not well-received by some, who demanded a full restoration of the statue and its fountain base, but PBOT said they couldn’t have it both ways: it was either the fountain or the bike lane.

However, it looks like they were able to find a compromise. The full street redesign isn’t done (there’s still no elk), but the restriped lanes are in full effect. Now car and bus operators can only drive in one lane instead of two and bike riders get an entire lane all to themselves!

I went to check it out yesterday, and found it pleasantly unremarkable, like it had been there all along. Other people biking or rolling on the new bikeway also appeared nonchalant and used the new lane naturally. I thought this was good – people don’t have to treat every new piece of infrastructure like a big spectacle in order to use it effectively.

But I imagine they’ll notice once the elk returns. The timeline on that is up in the air, but PBOT gave us something to tide us over: a new bikeway character decked out in antlers.

I’m glad PBOT didn’t wait until the elk was ready to get this bike lane in. And when paired with the other nearby projects we recently expanded on, there are more exciting things on the horizon for people who bike downtown. Give me safer downtown Portland streets to bike on any day – I’ll be glad to see the elk back when it comes, but I can wait.

Check out our latest TikTok for another look at the new bike lane.