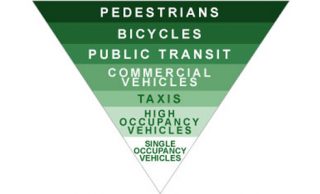 Created in 2009 for the city’s Climate Action Plan, it’s
maybe the city’s single most progressive statement of
transportation policy.

The City of Portland says (PDF) its new 20-year comprehensive plan is informed by three city documents that created a prioritized ranking for transportation needs.

But it’s an open question whether the “green transportation hierarchy,” as it’s been known since its creation in 2009, will be fully enshrined in the 20-year comprehensive plan as it previously was in the Sam Adams-era Climate Action Plan, Bicycle Plan for 2030 and Portland Plan.

Members of the city’s Bicycle Advisory Committee are making it one of their top requests to the city to keep the chart in place and intact.