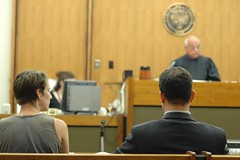 It’s been over nine years now since we first shared the concept of “citizen initiated citations” here on BikePortland. At that time it was a little-known statute. Today, people are a bit more aware of it; but it’s still not a process that many people have gone through.

Unfortunately however, it’s still needed. As the number of people who operate vehicles illegally shows no signs of letting up and enforcement resources remain abysmal, it’s often the only option for justice. With an unusually high number of collisions and other incidents reported lately, we’ve decided to publish this article from Ray Thomas, the Portland-based lawyer and expert on bicycling issues who’s been at the forefront of citizen prosecution for nearly a decade.

(Note: Thomas uses “drivers” in his article, but his advice can be used by any road user regardless of how they get around.) — Jonathan Maus

Citizen Prosecution of Dangerous Drivers: How You Can Do It for Yourself