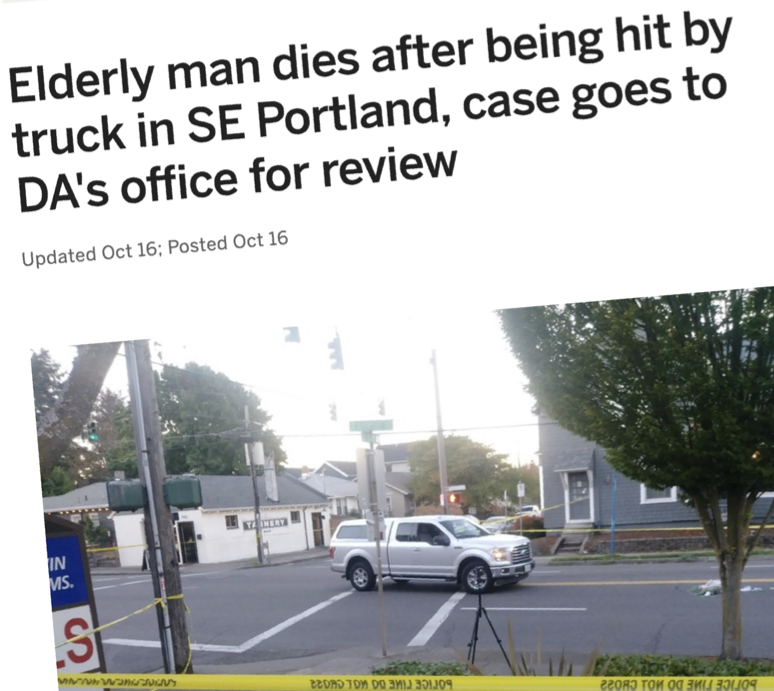 Two days ago I received a strange email. It was simultaneously matter-of-fact and tragic.

“Hi folks,” it read. “My dad was killed by a truck (he was walking at a crosswalk). I would like to stop his autopay subscription of $10/month.”

It only took me a few minutes to realize this man’s father was 82-year-old Charles McCarthy, who was hit and killed by a truck driver as he walked in the crosswalk of East Burnside and 55th on October 11th.

I wish it wasn’t true, but when people die while walking I don’t usually pay as much attention to the case as I would if they were cycling. That’s an intentional editorial and mental health decision. (Reacting to traffic deaths takes a toll and I have limited professional and personal capacity to do it. I also don’t want to set the expectation that I will cover walking deaths with the same attention and depth as cycling deaths).

Even though I didn’t look too deeply into this case initially, I now wanted to know more about Mr. McCarthy. So I did what I often do in situations like this: I emailed the District Attorney’s office to find out if there were any updates on the case, I looked up his subscriber information, entered his email address in the “search comments” field of BikePortland’s admin dashboard, and checked to see if he’d ever emailed me.