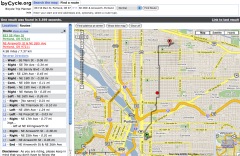 A sample route on byCycle.org.

Someday, you’ll be able to type two addresses into your computer and get customized directions for traveling between them — by bike. The addresses could be in the same city, or across the country. You could choose between different kinds of routes, or find out how to transfer to the bus or train for a leg of the trip.

That’s the dream, anyway. And it’s a dream being chased by a small, but determined band of bike-loving programmers and mapping experts across the country.

The idea of online bicycle route planning is at least as old as the advent of online driving direction programs such as MapQuest, and Portland became the epicenter of its realization in 2005 with the debut of byCycle.org.