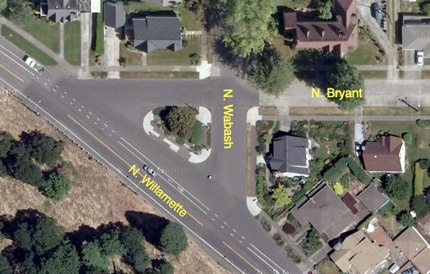 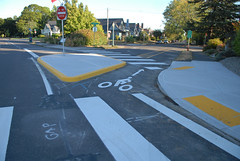 Lots of changes at intersection of
Wabash, Willamette and Bryant.
(Photos © J. Maus)

The Bureau of Transportation has completed their re-design of a North Portland intersection where two bike boulevards and a high-volume street intersect. The N. Wabash/Willamette/Bryant triangle has been significantly re-striped, two median islands have been added, there’s a new crosswalk, and other new signage. Taken all together, this intersection — which used to be relatively uncontrolled (see photo below) — is now a key hub in Portland’s burgeoning bike boulevard network. PBOT project manager Kyle Chisek says the signage, markings, and other work at this intersection cost about $9,000.

To get an idea of how major this change is, check out the before and after. Below is a satellite view of the intersection before the changes: