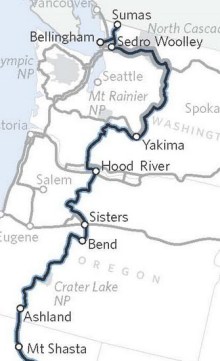 The Adventure Cycling Association will officially launch their new Sierra Cascades Bicycle Route tonight at the REI store in the Pearl District. As I reported back in February, the new route stretches nearly 2,400 miles from Canada to Mexico. It will also give Oregon a nice boost in bike tourism because it rolls through the Columbia River Gorge and Hood River before heading south through Sisters, Bend, and then onto Ashland.