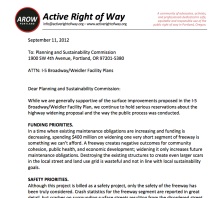 Active Right of Way (AROW), an all-volunteer transportation activism group, is expressing “serious reservations” with the Draft N/NE Quadrant and I-5 Broadway/Weidler Facility Plans. The project is a collaboration between the City of Portland and the State of Oregon that will spend $400 million to widen I-5 through the Rose Quarter and make a number of changes to adjacent surface streets. The group summed up their concerns with the project in a three page letter (PDF) sent to the City’s Planning and Sustainability Commission last week.

AROW opposes the project for several reasons. First among them are claims that the project doesn’t align with the right funding and safety priorities. The letter was signed by AROW leaders Steve Bozzone (who’s also a Willamette Pedestrian Coalition board member) and Alexis Grant. Below are some excerpts from their letter…