Here are the three projects and grant amounts (with descriptions provided by PBOT spokesperson Dylan Rivera):

Killingsworth has been identified by PBOT as a High Crash Corridor, with a high incidence of pedestrian crashes. Killingsworth has existing marked crosswalks. Given the traffic volumes, speed and crossing distance on Killingsworth, an analysis using national safety guidance shows that these crossings should be shortened or enhanced. This project proposes to construct raised concrete pedestrian islands at existing marked crosswalks at 7th, 22nd, 25th and 27th (recent improvements have been made at 30th). Additionally, pedestrian head start signals are recommended at the signalized intersection at 20th Avenue, where pedestrian crashes have been reported. All ramps at each crossing with the exception of 20th Ave will need to be updated with ADA compliant ramps. 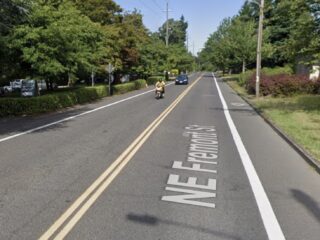 Install speed humps to address serious injury crashes related to speed. This segment of NE Fremont carries high volumes and high speeds as it provides a direct route to Interstate 84. 85th percentile speeds are reported at 42 MPH (speed limit in the area is 35 mph). Install speed bumps to reduce vehicle speeds to 30 MPH to improve safety on this section. Based on typical 300-foot spacing, PBOT anticipates 17 fire-friendly speed bumps will be installed. The exact number will be determined during design. 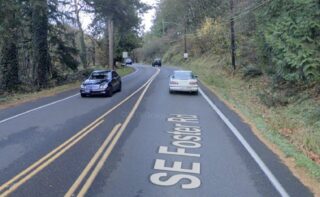 This section of SE Foster is rural in nature and experiences a road departure crashes at a higher rate than other streets in the City. The narrow shoulders, coupled with curves has resulted in 4 lane departure crashes (including 1 fatal) and 21 road departure crashes in a 5 year period. There are existing curve warning signs in place, as well as a speed reader board for westbound traffic. Lighting was evaluated and appears to meet City standards. Both centerline and shoulder rumble strips are recommended to directly address the lane and road departure crashes occurring on SE Foster.

Rivera says all three projects are tentatively scheduled to be designed in 2022 and go into construction in 2023.

Does anyone know if PBOT/ODOT check the effectiveness of their improvements after they’re installed? I ask because my observations since the fire friendly speed humps were installed on NE 92 between Halsey and Fremont are that they haven’t done much to slow down traffic on that stretch. I could very well be wrong, but it sure would be a shame to spend this money on a project that may not actually do what it’s supposed to do.

This is a common perception, but they do work in terms of reducing high-end speeding. People are still going to drive 5 mph over the speed limit, but what they’re really good at is keeping people from going 30, 35, 40, etc on a street that’s supposed to be 20 or 25. It’s very hard to go flying down a street like a maniac when you hit the speed bumps over and over.

It’s very hard to go flying down a street like a maniac when you hit the speed bumps over and over.

It is a bit easier with “fire-friendly” speed bumps.

Due to the dysfunction of PBOT and the city of Portland in general I doubt they have any idea of the effectiveness of their projects. They can barely even tow gutted burned out vehicles away. Sometimes I feel like I’m living in a 3rd world country. 🙁

I feel like those speed bumps have made a huge difference on that stretch, along with the new permanent ‘slow streets’ planter at Tillamook that’s slightly out into the road on 92nd. The biggest problem I see for speed bumps is that we now have more and more massive pick ups and SUVs that speed bumps don’t seem to impact them like they do regular sized cars.

In addition, most cars are now leased, rather than owned. I suspect people who know they will be turning in their car in three years will be less concerned about speeding over bumps.

Steve B
Reply to  J_R

I don’t think that’s true about “most cars are now leased”. Do you have a citation for that? Here’s what I found:

“Lease options were found in around one out of four vehicles in the United States in 2021 – including cars – with the others being sold outright.”

Additionally, any damage that occurs to a car during a lease has to be repaired at the lease-holder’s expense when returned.

Two people run over and one killed just last night on NE Fremont.

Too bad the proposed safety improvements won’t extend to the location where the person was killed last night.

Adding rumble strips to Foster shoulders will make the road unusable for cyclists. I’ve never seen any bikes on that section of Foster, anyway, and springwater does parallel the route. So maybe it’s not a big deal. But PBOT has been showing a general tendency to make all infrastructure that isn’t explicitly designed for bicycles more hostile and less hospitable to bike riders.

A lot of people are downright scared of riding on the springwater these days. Maybe an alternate route would be preferable to some? Is there a way to address safety concerns on Foster that doesn’t preclude the possibility of riding bikes on it?

That is going to buy a lot of orange barrels!